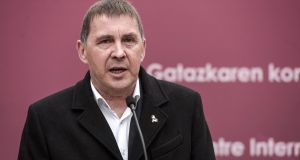 Arnaldo Otegi has served several jail terms, including one for involvement in an Eta kidnap in the 1980s. Photograph: Iroz Gaizka/AFP/Getty

Separatists in Spain are furious at a supreme court decision to repeat the trial of Basque politician Arnaldo Otegi for allegedly trying to re-form an outlawed party linked to terrorism.

Mr Otegi, who is leader of the EH Bildu pro-independence coalition, received a 6½-year prison sentence after being found guilty in 2011 of reconstituting Herri Batasuna, the political wing of terrorist organisation Eta, along with four other defendants. The five completed their prison terms between 2016 and 2017.

In 2018 the European Court of Human Rights found that the judicial process had been flawed because the presiding judge, Ángela Murillo, had shown a lack of impartiality in a previous trial of Mr Otegi. He and his supporters welcomed the Strasbourg tribunal’s ruling as vindication of their claim that the Spanish justice system was skewed.

However, in a highly unusual move, the supreme court has now decided to try all five defendants again, arguing that European law allows a retrial.

“A procedural defect cannot turn into a penal exemption,” noted the court’s prosecutor in November, arguing in favour of the process being repeated.

Although the supreme court decision on this question was unanimous, it has been a divisive issue within the judiciary. The national court, which handles many terrorism cases, has issued two reports in recent weeks arguing against the trial being repeated.

In response to the news that he will face trial again, Mr Otegi wrote on Twitter: “They didn’t tame us, they didn’t bend us, they won’t subdue us!”

The EH Bildu leader has served several jail terms, including one for involvement in an Eta kidnap in the 1980s. However, he has also been credited with helping persuade Eta to end its use of violence, which it formally did in 2011, before disbanding in 2018.

The original sentence, which found that the five had been taking orders from Eta, drew criticism from a number of international figures. Gerry Adams and South African bishop Desmond Tutu were among those who called for Mr Otegi’s release from prison.

The others who also face a repeat trial are Rafael Diez Usabiaga, Miren Zabaleta, Arkaitz Rodriguez and Sonia Jacinto, all closely linked to the pro-independence Basque left.

Mr Rodriguez tweeted: “After spending six years in prison completely unjustifiably and illegally, after a European [court] annulment and without the organisation even existing, they have decided to try us again for membership of Eta. Democracy? What democracy?”

Catalan nationalists also attacked the decision, with a former president of Catalonia, Carles Puigdemont, describing it as a “mockery of Europe”.

However, others have been celebrating the development. The far-right Vox party, which along with a terrorism victims’ organisation registered a formal request in August for the trial to be repeated, took credit for the decision.

Macarena Olona, a member of parliament for Vox, said the retrial of Mr Otegi was “a great triumph for democracy”.