Attacks on the US election system orchestrated by Trump escalates 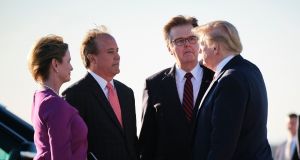 Anyone who has observed Donald Trump over the past four years will not be surprised at the US president’s behaviour since the election.

He had warned that he would not accept the result if he lost, cynically laying the ground for spurious claims about election fraud. What was unforeseen was the reaction of a broad swathe of Republicans.

This week, the attacks on the US election system orchestrated by Trump escalated.

On Tuesday, the state of Texas filed a lawsuit with the supreme court claiming that the election in four other states was unlawful. The state’s Republican attorney general, Ken Paxton, called on the highest court in the land to block Pennsylvania, Georgia, Michigan and Wisconsin from casting “unlawful and constitutionally tainted votes” when the Electoral College meets on Monday to formalise the result of the election.

The four states – three of which are controlled by Democratic governors – hit back, filing court papers urging the supreme court to reject the Texas petition.

“Mr Paxton’s actions are beneath the dignity of the office of attorney general and the people of the great state of Texas,” his Michigan counterpart Dana Nessel said.

Legal experts have cast doubts on the substance of the Texas case – quite apart from the unusual request by a state to have the supreme court act as a kind of trial court for other states. Some have wondered aloud if Paxton – one of several attorneys general believed to have met the president at the White House this week – is seeking a pardon from the president. He is under indictment in a securities fraud case and faces allegations of abusing his office – which he denies.

But the Texas case is more than just a long-shot legal challenge. Seventeen other states – all with Republican attorneys general – have joined the case. In a further escalation, 106 Republicans in Congress signed an amicus brief in support of the lawsuit aimed at overthrowing the election result.

The willingness of so many Republicans to ask the supreme court to intervene to, in effect, deny the results of the November 3rd presidential election is as unprecedented as it is alarming.

The US now faces a political vista whereby hundreds of elected officials are giving credence to Trump’s allegations of election fraud, even though the president’s own attorney general, William Barr, has said there is no evidence of fraudulent activity that would change the result.

Among the vocal backers of Trump on the issue is Senator Ted Cruz, a former presidential candidate and rival to Trump who is a possible Republican candidate in 2024. Cruz is a regular contributor on conservative media, making claims of election fraud, and was reportedly asked by Trump this week to argue the Texas case if it is heard by the supreme court.

Some Republicans have spoken out. Pennsylvania senator Pat Toomey – incidentally, a strong supporter of Ireland on Capitol Hill – said it was completely unacceptable for Trump to urge states to overturn the result, and that he had personally congratulated president-elect Joe Biden.

But the vast majority of Republicans on Capitol Hill have not yet publicly accepted that Biden won the election. The most obvious explanation for their denialism is not just allegiance to Donald Trump, but fear of their voters. A Quinnipiac University poll this week found that 77 per cent of Republicans believe there was widespread fraud in the election.

Much of this public sentiment may reflect the continuing power of partisan, right-wing media outlets on political opinion in the United States. High-profile Fox News presenters like Sean Hannity are promulgating unsubstantiated claims of widespread voting irregularities.

Opening his prime time show on Thursday, Hannity praised the Texas lawsuit. “Seventeen attorneys general are not going to put their reputations on the line on any case without real significant legal merit and that is not on solid constitutional grounds,” he told his viewers. “We are not dumb, we are not blind, we can see the entire thing stinks to high heaven,” he said of the election, before segueing into a monologue on Hunter Biden – the son of Joe Biden who disclosed this week that his tax affairs were the subject of a federal investigation.

All this time, Donald Trump continues to wage war on the truth via his Twitter account. “#OVERTURN!!” he tweeted on Wednesday from the White House – the same day that the US passed a new milestone of more than 3,000 daily deaths from coronavirus.

The president has made no mention of the victims of the pandemic since he lost the election. What he has done is successfully elevate fringe fraud claims to the mainstream, through a clever manipulation of traditional and social media. The implications for American democracy may be profound.