Brexit: EU and UK under pressure to seal trade deal this week 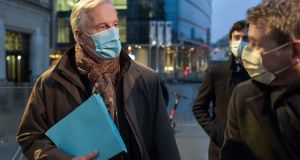 The UK and the European Union are in a race to conclude talks by the end of the week, after which implementation of any accord in time to avoid disruption on January 1st is seen as difficult.

Progress is inching forwards between the negotiating teams led by Michel Barnier and David Frost, sources close to the talks said, but with serious differences still remaining on the outstanding issues of fisheries and how to ensure fair competition.

Both negotiating teams view the fact that talks are ongoing as a positive sign. But the remaining differences are those that have been hardest to overcome, and negotiators are locked in talks in Brussels to try to avoid a trade shock in just over a fortnight.

UK prime minister Boris Johnson briefed his cabinet on Tuesday that the talks were still “most likely” to end without a deal, and that his administration wanted an agreement but not at “any cost”, the BBC reported.

The Irish Government is more hopeful, with officials believing the path to a deal is possible and that both sides’ willingness to keep talking despite missing a deadline last Sunday reflects political will for an accord.

With so little time remaining, discussion has turned to whether ratification of any deal by the UK and European Parliaments could be held after January 1st. But ideas of provisionally applying the accord or creating a “bridging” arrangement are seen as legally and politically challenging.

The European Commission has warned that this could be a period of no-deal until an agreement is approved, meaning a few weeks in which member states would legally be required as members of the World Trade Organisation to levy tariffs, with additional widespread disruption as legal arrangements dissolve overnight.

Leader of the House of Commons Jacob Rees-Mogg said a deal could theoretically be ratified after it came into force, but that this would involve significant legal risks due to the gap between domestic and international law.

“If both sides accept that ratification is done in a different way, that is theoretically possible,” Mr Rees-Mogg said when asked about the issue on a ConservativeHome podcast.

The European Parliament has piled on the pressure for a conclusion, with prominent MEPs warning that unless they have the text of a deal to examine by the end of the week they may refuse to vote on it by the end of the year, in a demand for more time to scrutinise the details.

German MEP Bernd Lange, who chairs the parliament’s trade committee, described a decision to extend talks as “irresponsible and bitter” and said that “serious ratification is becoming increasingly impossible”.

The outstanding differences centre on Britain’s demand to claw back most of the €650 million in fish caught by EU boats in its waters annually and determine access in annual quota talks, and how to manage divergence between the two regulatory systems to ensure fair competition.

There were reports that negotiations on Erasmus+ had concluded unsuccessfully and that students in the UK would be locked out of the popular exchange programme, but this was denied by sources close to the talks.

“Negotiations with the EU are ongoing. It would not be appropriate for us to pre-empt the outcome of these discussions,” a UK government spokeswoman said. Britain is, however, preparing a contingency plan of a domestic UK-wide Erasmus programme in case negotiations are unsuccessful.