Emmanuel Macron’s plans to change the labour code is not democratic, say opponents 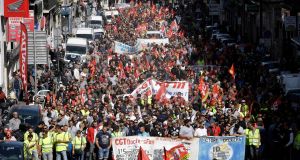 It has taken decades to hone the ritual of the French street demonstration. Colourful crowds shout slogans, watched by lines of surly CRS riot police. As the march nears its destination, black-clad youths attack police with stones, bottles and fire crackers.

The police shoot stun guns and tear gas. Organisers dissociate themselves from the violence. The police provide low estimates for the number of demonstrators, which trade union organisers multiply several times over.

Tuesday’s march, organised by the communist CGT to protest against President Emmanuel Macron’s labour reforms, mobilised 24,000 in Paris, according to police, 60,000 according to the CGT. Smaller numbers marched in Lyon, Marseille and Nantes, where there were also violent clashes.

For once, the black-clad youths did not hide themselves on Tuesday. They cheekily led the 5.5km march from the Place de la Bastille to the Porte d’Italie, going on the offensive in the last few hundred metres.

In the first round of the presidential election, the dozen demonstrators I interviewed all voted for Jean-Luc Mélenchon, the leader of the far-left party France Unbowed. Mélenchon calls the labour reforms a “social coup d’état”.

Mr Macron is trying to simplify France’s 3,334-page labour code. Demonstrators said it protects them. Suggestions that the French labour market might be over-regulated, or that reform might lower unemployment, were dismissed out of hand. Social partnership is an alien concept in France, where labour relations have always been a Darwinian struggle.

Gamze (34) and Umit (50) are French citizens of Turkish origin who hold government-subsidised jobs , helping migrants. The Macron administration is cutting the number of subsidised jobs from 459,000 to 293,000 this year, and both fear being fired. “Without work we don’t exist,” Umit says. “I’m lazy,” Gamze laughs, alluding to Mr Macron’s criticism of his opponents.

Daniel (62) works with children with disabilities. His retired colleague Alain (67) joined him for the march. Daniel turns around to show the hand-painted sign on his back. “Lazy. Cynical. Extreme,” it says, quoting Mr Macron.

“The ‘hierarchy of norms’ [which required management to negotiate with trade unions] was the heart of the labour code,” Alain says. In businesses with fewer than 50 employees – the majority in France – management can now circumvent unions. Under the reform, “bosses will know exactly what it will cost them to fire workers,” Alain laments. “The little guys will have to fend for themselves.”

Though they are not affected directly by the labour reform, civil servants turned out in large numbers. Francoise (60) was protesting Mr Macron’s decision to pass the reform by decree. “No debate. Nothing. He consults the trade unions and that’s it. It’s not democratic. It’s brutal.”

Demonstrators were divided between those who abstained in the second round of the presidential election and those who voted unwillingly for Mr Macron, to prevent Marine Le Pen from winning. “Between an economic liberal and a fascist, I chose the liberal,” Francoise says. “Macron acts as if business makes the world go round.”

What is so bad about economic liberalism? “The liberal is interested in finance and markets. He doesn’t care about human beings,” Francoise replies.

Alexandre (30) marched with a group of 10 teachers. The labour reform allows employers to lower bonuses on overtime pay, he notes. “Lower salaries will affect us all. Teachers haven’t had a pay rise in a decade. The average teacher earns €2,000 monthly.”

The teachers saw the labour reform as the first salvo in the demolition of the French social model. They criticised the partial privatisation of the SNCF railway company, and what they see as an attempt to privatise social security, by requiring businesses to provide health insurance for employees.

A man walks by, chanting, “Macron, the bosses’ president. Macron, president of the rich” over a loudhailer.

At 57 per cent of GDP, France’s public sector is one of the most expensive in the world. “That’s because it includes social security, pensions, healthcare, welfare payments, the entire public service,”says Martin (28), also a teacher.

Martin was particularly exercised by a report in the “capitalist” magazine Challenges that the 500 richest people in France now possess 25 per cent of GDP, up from 6 per cent in 1996. “We’re living in the 19th century!” Martin says.