Martin Rooney (57), who has Irish connections, was convicted of forced labour offence 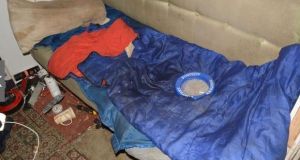 Eleven members of an Traveller family with Irish roots have been jailed in the UK for violently exploiting at least 18 victims of modern slavery.

The Rooney family, who were based on Traveller sites in Lincoln, targeted homeless people and men with learning disabilities to work and live in squalid conditions for up to 26 years. Their offences were described in court as “chilling in their mercilessness”

The victims were kept in caravans without running water or toilet facilities, Nottingham Crown Court heard, while their captors wore Rolex watches, drove expensive cars and lived in gleaming homes that were “palatial in comparison” to their workers’ conditions.

Judge Timothy Spencer said the difference in their lives was “akin to the gulf between medieval royalty and the peasantry” as he jailed 11 members of the family for up to 15 years on Tuesday.

Martin Rooney Sr (58), the head of the family, was jailed for 10 years and nine months, for orchestrating what the judge described as a “criminal culture” at Drinsey Nook, the Traveller site where they were based.

His twin sons, John and Patrick Rooney (32), were both sentenced to 15 years in prison.

The judge said the pair were “clearly the most culpable” of those in the dock as their father was not leading the operation when police swooped. A further eight of their relatives were handed jail terms of up to seven years.

A series of trials heard how the Rooneys targeted men who were homeless, alcoholic or with mental health problems, often picking them off the streets outside hostels or night shelters.

Their victims, who were aged between 18 and 63, were lured with promises of work, money, shelter and food, the court heard.

Once taken to Drinsey Nook, they were put up in “broken-down, ill-equipped and dirty” caravans without running water, heating or toilet facilities. Then they were put to work laying tarmacked drives, “dawn to dusk, seven days a week in all weather” and usually without a break, and only rarely were they provided food or drink, the judge said.

“Sometimes payment was not monetary but by cheap cider which promoted a dependency upon alcohol, which provided another means of control over them,” Judge Spencer added.

Their victims lived in constant fear of violence, the court was told.

One man, who was exploited by the family for at least 12 years, was beaten by a “Rooney lynch mob” when a car he was driving ran out of petrol.

By the time they were arrested, the family had spent £36,000 worth of this man’s income support and disability living allowance.

The judge told the Rooneys: “Your victims had reached a position where they were cowed into submission. Any resistance, they knew, was futile. It would have been met by you recruiting other family members and delivering more violence.

“You knew they would offer no resistance at all - nor did they. These offences are chilling in their mercilessness.”

Detectives said the Rooneys were living a “life of luxury” in stark contrast to the squalor of their victims. They enjoyed holidays to Barbados, Australia, Egypt and Mexico and lived in “immaculate, gleaming homes” while Patrick and John Rooney were coached at Manchester United football school.

“This was all funded on the back of the forced labour of your victims,” said the judge, “whilst your workers’ only solace was cheap cider and for some a packet of tobacco, consumed in squalid surroundings.”

In a statement, Pavee Point Traveller & Roma Centre welcomed the sentencing and said it condemns the exploitation of vulnerable human beings .

“The people involved in this exploitation are devoid of all humanity,” said Pavee Point co-director Martin Collins.

“We hope this case won’t be used as a stick to beat Travellers with, as Travellers are appalled and sickened at this case,” he said.

Chief Supt Chris Davison, head of crime at Lincolnshire police, said: “We will not rest on this result as there are potentially other victims of modern slavery in our county. We are exploring five active investigations and we will continue to put any victims at the very heart of our investigations.

“The severity of these crimes is underlined by the sentences imposed by the judge. The victims will never get the years back that were taken away from them but I hope this provides them with some comfort that justice has been served and demonstrates that we will do everything in our power to try and stop others suffering in the ways that they did.”

The National Crime Agency disclosed last month that there were possibly tens of thousands of modern slavery victims in the UK, far more than law enforcement previously thought.

Simon York, the director of Her Majesty’s Inspectorate of Constabulary’s fraud investigation unit, said: “This was a truly appalling case. These people lived a life of luxury by exploiting and abusing highly vulnerable individuals. They stripped them of their humanity, forcing them to live and work in terrible conditions.”