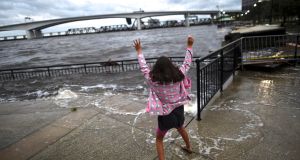 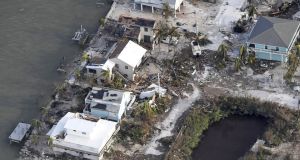 Damaged houses are seen in the aftermath of Hurricane Irma on September 11th, 2017 over the Florida Keys. Photograph: Matt McClain-Pool/Getty Images 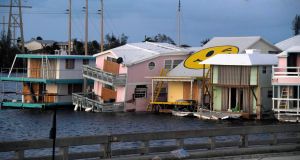 The aftermath of Hurricane Irma: approximately 25 per cent of the houses on the islands that make up the Florida Keys have been destroyed. Photograph: EPA/Matt McClain-Pool 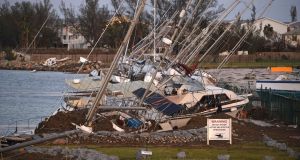 More than six million homes and businesses remained without power on Tuesday in Florida and thousands were still displaced as the full scale of the damage left by Hurricane Irma was revealed.

As rescuers reached the Florida Keys – the chain of islands on the southern tip of the state – the full extent of the damage to the region became clear with up to 90 per cent of the homes and buildings damaged to some extent by the storm which landed in the early hours of Sunday morning.

US president Donal Trump is due to visit Florida on Thursday.

Approximately 25 per cent of the houses on the islands that make up the Florida Keys have been destroyed, while 65 per cent have suffered major damage the Federal Emergency Management Agency (FEMA) said. “Basically, every house in the Keys was impacted some way,” FEMA administrator Brock Long said.

The region was still without power and running water, though there were no reports of any fatalities. Governor Rick Scott has warned of a possible humanitarian crisis in the region “My heart goes out to the people on the Keys. I mean, it’s devastation. I just hope everybody survived. It’s horrible, what we saw,” he said following an aerial tour of the region on Monday.

Further north in Jacksonville, one of the cities worst hit by the storm, the city was still recovering from the flash-floods that engulfed the region on Monday leading to hundreds of emergency rescues. While the city’s mandatory evacuation orders were lifted on Tuesday, Jacksonville’s mayor, Lenny Curry, warned that serious flooding continued. “There are still road blockages, there is still serious flooding, so there is a possibility you may not be able to get back to your home.”

Florida’s main utility company has warned that it may take weeks to restore electricity to some areas.

The remnants of Hurricane Irma, which hit the Florida Keys as a category four hurricane on Sunday, continued to move north westwards into Tennessee throughout Tuesday. Though areas of Georgia received heavy rain, the storm has weakened considerably. Nonetheless areas of Tennessee, Alabama and western Mississippi are expected to receive heavy rain as the tropical storm passes through.

In Houston, still recovering from Hurricane Harvey which hit just over two weeks ago, people continued to return to their homes, though an analysis by the New York Times found that flood water in two areas of the city has been contaminated by toxins and bacteria. Several waste treatment plants in the region are not working according to the Environmental Protection Agency .

Meanwhile, French president Emmanuel Macron arrived on the French territories in the Caribbean that were ravaged by the storm last week, promising further aid for the region. Ten people were killed on the French island of Saint Barthélémy – known colloquially as St Barts – and on the French part of Saint Martin which it shares with the Netherlands.

Arriving in Guadeloupe Mr Macron said that the French government had responded to the crisis with “one of the biggest airlifts since World War Two”.

Dutch monarch King Willem-Alexander visited Dutch territories in the region on Tuesday, including Saint Maartens which has been badly hit by looting.

British foreign secretary Boris Johnson is due to visit the British Virgin Islands and Anguilla later this week.