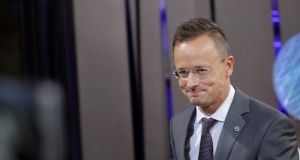 Hungary and Russia have lambasted Kiev over a new education law they say will deprive Ukraine’s ethnic minorities of the right to study in their own languages.

Poland and Romania have also expressed concern over the reforms, prompting Ukrainian prime minister Volodymyr Groysman to order his officials to explain to European Union states how the changes will protect minority languages spoken by millions of the country’s people.

The angriest reaction came from Budapest, where foreign minister Peter Szijjarto said Ukraine had “stabbed Hungary in the back” and announced that his government would complain about the new law to the EU and United Nations.

“We continue to regard as shameful and outrageous the new education Act, which drastically restricts the access of minorities...to native language teaching in a manner that makes that practically impossible from the age of 10 and is incompatible with European values and regulations,” Mr Szijjarto said.

“The new law not only goes against regulations on Hungarian-Ukrainian relations and the association agreement between the European Union and Ukraine, but also seriously contravenes Ukraine’s own constitution.”

On Tuesday, Russia’s foreign ministry said: “It is clear that the main aim of the current Ukrainian deputies is to infringe as much as possible on the rights of millions of Russian-speaking citizens in Ukraine and to forcibly establish a mono-ethnic language regime in a multinational state.”

Moscow called for collective action in international organisations to block what it described as “an attempt to achieve the full ‘Ukrainian-isation’ of the country’s education sphere.”

While Hungary’s populist ruling party is gearing up for elections and may want to shift attention from its own clash with the EU over education reform and other issues, and Russia has been locked in a multifaceted conflict with Ukraine for over three years, even some of Kiev’s stronger allies are concerned by the reform.

Poland has said it will “closely monitor the implementation of the law and take all necessary steps to provide Poles in Ukraine with access to teaching in Polish”.

Romania, meanwhile, said “the need to conform with international norms on promoting and protecting the rights of people who belong to the Romanian national minority in Ukraine has been continually pointed out” in talks with Kiev.

Ukraine insists the changes – which have been welcomed by the United States – are in line with international norms and should not worry the EU or its member states, upon which Kiev relies heavily for support.

Mr Groysman said the law would help “provide normal access to the languages of national minorities and would also offer possibilities for the development of our native Ukrainian language”.

He ordered Ukraine’s foreign and education ministers “to meet envoys from EU states to fully explain the details of the law and how the mechanism will work”.

Issues of language and national identity are very emotive for Ukraine’s 45 million people, as it tries to integrate with the West after centuries of domination by Russia, which has responded by annexing Crimea and fomenting a war in eastern Ukraine that has taken more than 10,000 lives.