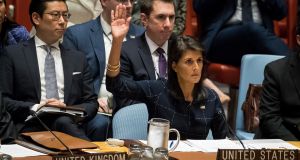 Nikki Haley, US ambassador to the UN, raises her hand to vote Yes to levy new sanctions on North Korea at UN headquarters in New York on Monday. Photograph: Drew Angerer/Getty Images 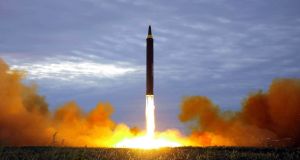 A photograph released by the North Korean government of what it said was the test launch of a Hwasong-12 intermediate range missile in Pyongyang, North Korea, on August 29th. Photograph: Korean Central News Agency/Korea News Service via AP

The United Nations Security Council unanimously stepped up sanctions against North Korea on Monday over the country’s sixth and most powerful nuclear test on September 3rd, imposing a ban on the country’s textile exports and capping imports of crude oil.

It was the ninth sanctions resolution unanimously adopted by the 15-member council since 2006 over North Korea’s ballistic missile and nuclear programmes.

Japan and South Korea said after the passage of the US-drafted Security Council resolution they were prepared to apply more pressure if North Korea refused to end its aggressive development of nuclear weapons and ballistic missiles.

The US watered down an initial tougher draft resolution to win the support of Pyongyang ally China and Russia.

A week ago, US ambassador to the United Nations Nikki Haley called for the “strongest possible” sanctions on North Korea and had sought an oil embargo on Pyongyang.

On Monday, Ms Haley said the US was not looking for war with North Korea and that Pyongyang had “not yet passed the point of no return”.

“If it agrees to stop its nuclear programme, it can reclaim its future. If it proves it can live in peace, the world will live in peace with it,” she told the Security Council, after the council adopted the new sanctions.

Ms Haley added that the latest resolution “would not have happened” without the strong relationship that had developed between US president Donald Trump and Chinese president Xi Jinping.

China’s UN ambassador, Liu Jieyi, urged North Korea to “take seriously the expectations and will of the international community” and called on all parties to remain “cool-headed” and not stoke tensions.

North Korea’s ambassador, Han Tae-song, told the UN-sponsored Conference on Disarmament in Geneva on Tuesday that the US was “fired up for political, economic, and military confrontation”.

The North regularly threatens to destroy the South and its main ally, the US, which it accuses of continual preparation for invasion.

“My delegation condemns in the strongest terms, and categorically rejects, the latest illegal and unlawful UN Security Council resolution,” he said.

The Democratic People’s Republic of Korea (DPRK) was “ready to use a form of ultimate means”, Mr Han said, without elaborating.

“The forthcoming measures by DPRK will make the US suffer the greatest pain it ever experienced in its history.”

The Democratic People’s Republic of Korea is the North’s formal name.

US disarmament ambassador Robert Wood also took the floor to say the Security Council resolution “frankly sent a very clear and unambiguous message to the regime that the international community is tired, is no longer willing to put up with provocative behaviour from this regime”.

A Security Council resolution needs nine votes in favour and no vetoes to pass. In negotiations on the latest resolution, diplomats said Russia had questioned what leverage the Security Council would have left if North Korea continued to conduct nuclear and missile testing.

“This is a compromise in order to get everybody on board,” French UN ambassador François Delattre said of the draft ahead of the vote.

Textiles were North Korea’s second-biggest export after coal and other minerals in 2016, totalling $752 million (€628 million), according to data from the Korea Trade-Investment Promotion Agency. Nearly 80 per cent of the textile exports went to China.

The resolution imposes a ban on condensates and natural gas liquids, a cap of 2 million barrels a year on refined petroleum products, and a cap on crude oil exports to North Korea at current levels. China supplies most of North Korea’s crude.

Mr Trump has vowed not to allow North Korea to develop a nuclear missile capable of hitting the mainland United States.

North Korea was condemned globally for its latest nuclear test on September 3rd, which it said was of an advanced hydrogen bomb.

Pyongyang had warned the US on Monday that it would pay a “due price” for spearheading efforts on UN sanctions.

“The world will witness how the DPRK tames the US gangsters by taking a series of actions tougher than they have ever envisaged,” the foreign ministry said in a statement carried by the official KCNA news agency.

The tensions have weighed on global markets, but there was some relief on Monday among investors that North Korea refrained from conducting another missile test this past weekend to celebrate 69 years since its founding.

European Council on Foreign Relations UN expert Richard Gowan said the US had “rather predictably been mugged by reality” during the most recent negotiations on sanctions. He added that it was arguable, however, that the high US bar had pushed China and Russia to agree to more limited sanctions “relatively quickly”.

“China and Russia were never going to accept the severe package of sanctions tabled by Haley,” Mr Gowan said. “This sort of lengthy, incremental diplomatic bargaining may be the best it can hope for. The alternative is, after all, a slide towards war.”

Traditionally, the US has discreetly negotiated with China on any North Korea sanctions before expanding talks to the full council once the five veto powers have agreed. More recently, that has typically taken one to three months.

Chinese officials have privately expressed fears that an oil embargo could risk causing massive instability in its neighbour.

“I have said before that China agrees that the UN Security Council should make a further response and necessary actions with respect to North Korea’s sixth nuclear test,” he told reporters.

Russia and China have been critical that there is too much focus on pressuring North Korea with sanctions and not enough debate about kick-starting talks with Pyongyang.