Man of compassion or savage capitalist? The difficulty of defining Macron

Paris Letter: The French are struggling to make sense of their president 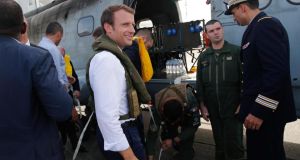 Four months after his election political commentators are still struggling to classify President Emmanuel Macron. In recent days he has been called a contemptuous snob, for dismissing opponents of his labour reform as lazy; a practitioner of the “politics of compassion”, for his proactive response to Hurricane Irma; a “neo-Protestant”; and the fomenter of “a liberal revolution that does not speak its name”.

Macron and his government have held constant crisis meetings and made endless statements of solidarity with the victims of Hurricane Irma, which claimed at least 10 lives and injured 112 people on the French islands of St Martin and St Bart. The show of compassion culminated with Macron’s trip to the islands on Tuesday. Images of the president at the bedside of hurricane victims vied with those of street demonstrators in mainland France.

“Every leader must, in the hour, in the minute, show that he is in communion with those who suffer, that he shares their misfortune, that he has set everything aside to concentrate on their tragic fate,” writes Laurent Joffrin, the editor-in-chief of the newspaper Libération. “That is the politics of compassion.”

Official compassion is an improvement on conservatives and economic liberals who gripe about the “nanny state”, Joffrin writes. Two recent books, The Compassionate Man, by Myriam Revault d’Allonnes, and The Time of the Victims, by Caroline Eliacheff and Daniel Soulez-Larivière, conclude that official compassion signifies democratic progress. For example, the authorities in China, a progressive dictatorship, did far less for famine victims than the government of India, an inegalitarian country but a democracy.

Macron’s politics of compassion may be one aspect of what Jérôme Fourquet of the Ifop polling company calls his “neo-Protestant moment”. Macron has expressed sympathy for migrants and supported Chancellor Angela Merkel’s generosity to them. Protestant groups in France, such as the NGO Cimade, have been leaders in fighting for migrants’ rights.

The leftist author Régis Debray originated the notion that with Macron’s victory France shifted from a Catholic-secular axis to a “neo-Protestant” model. Debray cites Macron’s concern for transparency and ethics. The first law passed by Macron’s majority in the National Assembly was the “law on the moralisation of political life”.

Richard Kearney, the Irish professor of philosophy at Boston College, studied with the late philosopher Paul Ricoeur, who was also Macron’s mentor. “It is accurate to say that Emmanuel Macron is someone of Catholic training, educated by Jesuits, but with a Protestant sensibility,” Kearney says. “His interest in transparency, ethics and education are very Ricoeur and very Protestant.”

Fourquet sees the defeat of François Fillon in the presidential election as a sign of changing French values. Fillon was supported by the majority of practising French Catholics, despite the scandal over his hiring of his wife and children as parliamentary assistants.

Thirty per cent of French Protestants voted for Macron in the first round of the election, six percentage points higher than his national score. Forty-nine per cent of Protestants surveyed by Ifop said political-financial scandals were a determinant factor in their vote, compared with only 33 per cent of Catholics.

The difficulty of labelling Macron, I suspect, partly explains the French public’s unease and his rapid fall in opinion polls. They don’t understand what he’s about.

Fourquet and Kearney differ regarding the president’s attachment to economic liberalism. Fourquet thinks Macron is under the influence of the “Protestant ethic”, which the German sociologist Max Weber linked to capitalism.

That certainly was not Ricoeur’s concept of Protestantism, Kearney says. And he doubts it is Macron’s, despite the president’s years as a merchant banker.

“Rabid individualism is a Catholic caricature of Protestantism,” Kearney continues. “Ricoeur was a left-wing Protestant who was against ‘go out and get rich and to hell with the community’. His Protestantism was responsible and fairly ecumenical.

Macron is crusading for more social policies in Europe while trying to roll back social spending in France. “That is a typical Ricoeur position,” says Kearney. “Maybe there is too much state regulation in France, and not enough at the European level. Macron, like Ricoeur, seeks a middle ground. In Trump’s America he’d be considered a communist. In France he’s condemned as a liberal.”

A 2016 poll by the Cevipof think tank showed only one-third of the French electorate accept economic liberalism. That helps to explain why Macron never uses the word “liberal”.

“I get the sense he is a political liberal, very much inspired by Ricoeur, but I don’t see him as a laissez-faire capitalist, in the strain of American liberalism,” says Kearney.