Brexit: May wins late-night vote but toughest battles still ahead 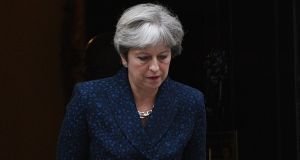 British prime minister Theresa May: The two-day debate on the legislation exposed widespread concern on the Conservative backbenches, even among Brexiteers, about the use of Henry VIII powers. Photograph: Facundo Arrizabalaga/EPA

Theresa May welcomed it as a historic decision that will put her Brexit negotiations on “solid foundations” but the late-night Commons vote in favour of the European Union (Withdrawal) Bill is a very conditional victory for the prime minister. MPs voted by 326 votes to 290 in support of the Bill on its second reading, with all Conservative MPs falling into line apart from Ken Clarke, who abstained.

Much of the media focused on a rebellion among Labour MPs, seven of whom defied a three-line whip to back the Bill, with a further 13 abstaining. But both the Conservatives’ loyalty and Labour’s rebelliousness are deceiving, as the prime minister will discover when the Bill returns to the Commons for line-by-line scrutiny in its committee stage.

Tory rebels agreed in advance of this week’s vote to keep their powder dry, directing their energies instead towards drafting amendments that will limit the government’s room for manoeuvre on Brexit. Only a handful of the Labour MPs who defied their party whip are die-hard Brexiteers and the others have made clear that they will back amendments to the Bill next month.

The two-day debate on the legislation exposed widespread concern on the Conservative backbenches, even among Brexiteers, about the use of Henry VIII powers to allow ministers to amend laws through secondary legislation. The Bill will transpose more than four decades of EU rules into British law and all sides agree that many of these rules will have to be amended to take account of Brexit.

The Bill, however, gives ministers sweeping powers to change laws without significant scrutiny in parliament, raising MPs’ hackles at what they see as a power grab by government. Ministers are expected to agree to compromise on the Henry VIII powers, perhaps through a triage system to determine which changes could be made through secondary legislation.

Among the numerous amendments tabled in the hours after the midnight vote, most have little chance of winning majority support. If the government compromises on the Henry VIII powers, the most dangerous amendments concern the nature of a post-Brexit transitional arrangement.

A number of amendments seek to give MPs the final say in defining the scope and duration of a transitional arrangement, with others demanding that Britain should remain in the single market and the customs union. With Conservative rebels preparing the show their teeth while Labour’s fall back into line, next month’s votes on the Bill could be much more nerve-wracking for the prime minister.