Britain and EU agree to postpone talks for ‘consultation’ period 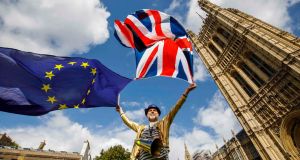 A pro-EU demonstrator outside the houses of parliament in central London against the first vote on a Bill to end Britain’s membership of the EU. Photograph: Tolga Akmen/AFP/Getty Images

Britain and the European Union have postponed their next round of Brexit negotiations for a week to “allow more time for consultation”. Britain’s Department for Exiting the European Union said the two sides had agreed to move the start of the fourth round of talks to September 25th.

“Both sides settled on the date after discussions between senior officials in recognition that more time for consultation would give negotiators the flexibility to make progress in the September round,” the department said in a statement.

The postponement comes amid speculation that Theresa May will deliver a major speech on Brexit on September 21st, in which she is expected to offer more detail on Britain’s hopes for a final deal.

Chancellor of the exchequer Philip Hammond told a House of Lords committee on Tuesday that Britain wanted a transition deal that would be as close as possible to the status quo.

“There is general agreement that it would not make sense to ask business to face two sets of changes, and that implies that a transition or interim period would need to look a lot like the status quo, otherwise businesses will be making one set of changes at the beginning of the interim period and another set towards the end of it,” he said.

Mr Hammond told the House of Lords economic affairs committee that Dover, Britain’s busiest port, would be unable to cope if customs checks were imposed from March 2019, when the country leaves the EU.

“Anyone who’s visited Dover will know that Dover operates as a flow-through port and volumes of trade at Dover could not be accommodated if goods had to be held for inspection. Even, I suspect, if they were held for minutes, it would still impede the operation of the port. Roll-on, roll-off traffic at Dover is predicated on trucks rolling off a ferry immediately, out of the port and the ferry reloading and departing pretty rapidly – Ryanair-style turnaround times. Anything that caused delay in vehicles exiting the port, delay in vehicles offloading, would cause significant disruption to patterns of movement,” he said.

The House of Commons backed the European Union (Withdrawal) Bill on its second reading early on Tuesday morning, but MPs tabled more than 150 amendments to it later in the day. One amendment, drafted by former Conservative attorney general Dominic Grieve, calls for MPs to be given a vote on the final Brexit deal agreed with the EU.

Other amendments seek to limit ministers’ powers to amend EU laws as they are transposed into British law without parliamentary scrutiny.

“We will look at all the amendments and consider them in the usual way. The prime minister has said she is going to listen to the concerns of her colleagues,” Ms May’s official spokesman said.

The devolved administrations in Scotland and Wales are expected to announce this week that they will withhold consent for the legislation, which they describe as a power grab by Westminster.