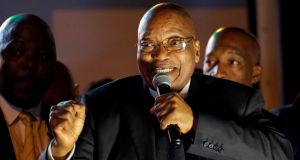 South African president Jacob Zuma has suffered a blow in his efforts to ensure his preferred candidate is elected to succeed him. Photograph: Reuters/Mike Hutchings

South Africa’s president, Jacob Zuma, has suffered a blow in his efforts to ensure his preferred candidate is elected to succeed him as leader of the ruling African National Congress.

A high court ruling on Tuesday could change the balance of power at the ANC’s national elective conference in December.

The court in Pietermaritzburg declared the ANC’s elective conference in KwaZula-Natal in 2015, which elected a number of allies of South Africa’s president, Jacob Zuma, to be “unlawful and void”.

Of South Africa’s nine provinces, KwaZulu-Natal is where the former liberation movement has established its largest number of branches, which elect the party’s national leadership every five years.

Until recently Mr Zuma has kept a firm grip on power in KwaZulu-Natal, his home province, but if his allies fail to get reinstated to their leadership positions in the province, his influence could weaken ahead of the election to pick his successor as leader of the ANC.

The two front-runners to replace Mr Zuma are his former wife and preferred candidate, Nkosazana Dlamini-Zuma, and South Africa’s deputy president, Cyril Ramaphosa. The backers of both individuals are increasingly involved in a bitter struggle to propel their candidates into the ANC’s top positions.

The case heard at the high court was brought by ANC councillor Lawrence Dube and four others in May 2016, after former KwaZulu-Natal premier Senzo Mchunu was ousted as the ANC’s provincial chairman in the disputed poll a year earlier. He was replaced by Sihle Zikalala, a staunch Zuma ally.

Mr Mchunu has not yet openly backed Mr Ramaphosa to become the ANC’s next president, but he is believed to be canvassing for him behind the scenes.

Mr Dube claimed in court papers that the 2015 conference was held prematurely, that it was riddled with irregularities and the results were rigged. He and the other applicants also argued that legitimate delegates were barred from attending the conference.

After the verdict was delivered, ANC KwaZulu-Natal provincial spokesman, Mdumiseni Ntuli, said that “in all likelihood” the executive committee would appeal the high court’s decision to the supreme court of appeal.

In that instance, the entire ANC Free State leadership delegation scheduled to participate in the national conference was not allowed to vote.