Greek election: Yanis Varoufakis is back in the game 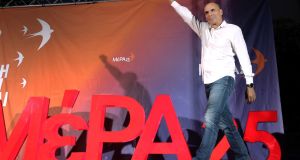 Remember Greece’s leather-clad, motorcycle-riding finance minister who clashed repeatedly with his hardline German counterpart during the standoff over a third bailout? Well watch out – Yanis Varoufakis is officially back in the game.

MeRA25, the Greek wing of Mr Varoufakis’s new pan-European DiEM25 party, won 3.4 per cent of the vote in Sunday’s general election, just above the 3 per cent threshold necessary to enter parliament and giving them nine deputies in the 300-seat chamber.

“The size of our result is small but it is big enough to change a lot,” Mr Varoufakis said in Athens after Sunday’s election won by Kyriakos Mitsotakis’s New Democracy party.

A trained economist who has lectured at universities in Britain, Australia and the US, the 58-year-old’s frequent media appearances have turned him into a household name far beyond his native Greece. He has been a thorn in the side of policy makers from Athens to Brussels and beyond and describes his life as a renegade economist as akin to that of “an atheist theologian ensconced in a Middle Ages monastery.”

Picked in January 2015 as Alexis Tsipras’s first finance chief, Mr Varoufakis quit in July the same year over the terms of Greece’s aid package. After voters rejected the bailout plan in a referendum with a bigger-than-expected 61 per cent, he resigned the next day, saying there was “a certain preference” among European creditors that he no longer be involved in negotiations and that he would wear their loathing with pride.

Mr Varoufakis branded former German finance minister Wolfgang Schäuble, who at one point favoured Greece’s temporary exit from the euro, a “puppet master”. He later used a comment by International Monetary Fund managing director Christine Lagarde that she could only discuss Greece’s debt problem with “adults in the room” as the title of his memoir.

Our role is to be “responsibly resistant”, Mr Varoufakis said in a Bloomberg News interview in Athens ahead of the election. MeRA25’s focus would be to counter the proposals of the Mitsotakis government that “will try to sell off for peanuts what’s left of public assets and all that at the expense of the private sector”.

The election also saw another new entrant to parliament, the far-right Greek Solution of Kyriakos Velopoulos. Founded in 2016, the party, which won its first parliamentary seat in May’s European elections, secured 3.7 per cent of the vote. Another far-right party, Golden Dawn, failed to reach the 3 per cent threshold this time around, winning 2.9 per cent. – Bloomberg