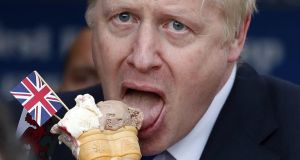 Boris Johnson insists he is not bluffing about being prepared to leave the EU without a deal. Photograph: Frank Augstein/Pool via Bloomberg

MPs at Westminster could use a Northern Ireland Bill on Monday to block Boris Johnson from suspending parliament to force through a no-deal Brexit in October.

Former Conservative attorney general Dominic Grieve said the Bill, which would delay Stormont elections while powersharing talks continue, was a legitimate choice for an amendment to stop the UK leaving the EU without a deal.

“Northern Ireland and Brexit go rather closely together. The chances are, if Brexit goes through – a no-deal Brexit – it is going to be the end of Northern Ireland’s union with the United Kingdom, with serious political consequences flowing from it,” he told the BBC.

“That’s a Bill that is a perfectly legitimate place to start looking at how one might make sure no-deal Brexits are fully debated before they take place.”

The Northern Ireland (Executive Formation) Bill would delay the need to hold an Assembly election until October 21st, with the option of a further extension until January 2020. It would also give civil servants more clarity about what decisions they could make in the absence of an Executive.

With parliament due to go into recess on July 25th and the current extension expiring on August 25th, the government hopes to pass all stages of the Bill on Monday.

Armagh-born Labour MP Conor McGinn has tabled an amendment that would oblige the British government to introduce same-sex marriage in Northern Ireland if the Stormont institutions have not been restored within three months. Mr McGinn’s amendment has cross-party support, and Northern Ireland secretary Karen Bradley said last week that the government would allow a free vote on the issue.

If Mr Grieve tables an amendment, it is expected to oblige the government to make a statement to the House of Commons in October on progress towards restoring the devolved institutions. This would prevent the next prime minister from proroguing parliament to force through a no-deal Brexit, a move Mr Johnson has refused to rule out.

Mr Johnson, who is clear favourite to win the Conservative leadership contest against Jeremy Hunt, insisted on Sunday that he was not bluffing about being prepared to leave the EU without a deal.

“We were pretty much ready on March 29th. And we will be ready by October 31st. And it’s vital that our partners see that. They have to look deep into our eyes and think, ‘My God, these Brits actually are going to leave. And they’re going to leave on those terms’,” he told the Sunday Telegraph.

“Everybody who says ‘I can’t stand the idea of a no-deal Brexit’, what they really mean is actually they don’t want to leave at all.”

Conservative opponents of a no-deal Brexit claim there are enough of them to block a no-deal Brexit if speaker John Bercow is willing to find innovative ways to ensure that MPs can have their say.

“I think it is about 30, 30-plus. But what they will be looking to do is stop a new prime minister from proroguing Parliament in order to deliver no deal,” former universities minister Sam Gyimah told Sky News. “But also create options for the new prime minister so that no deal is not the only option we face on October 31st.”