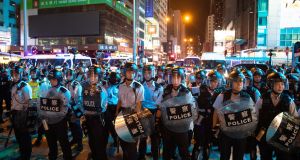 Police arrested six people during a demonstration in one of Hong Kong’s most popular tourist areas on Sunday Photographer: Kyle Lam/Bloomberg

Police arrested six people during a demonstration in one of Hong Kong’s most popular tourist areas on Sunday, where thousands of protesters sought to raise awareness among mainland Chinese visitors about the political crisis that has rocked the city.

Protest organisers said 230,000 people marched through the streets of Kowloon, across the harbour from Hong Kong’s Central business district, in the latest wave of demonstrations against an extradition bill that would allow people to be sent to mainland China to face trial.

This time, their chants sounded different. Instead of Cantonese, as typically used in Hong Kong and southern China, many switched to Mandarin, a common language in Beijing and across large parts of China.

Their mission was to convert mainland Chinese tourists to their cause. Although the Chinese mainland is only 14 minutes away on the fast train, media and social media platforms across the border are heavily censored so there is little awareness that protests have rocked the financial hub for the past month over an extradition Bill that could force Hong Kongers to face mainland courts.

The demonstrators handed out explainer leaflets in the simplified Chinese text used in northern China, and airdropped messages to the phones of the new arrivals.

In an irony that was not lost on the crowds, several march leaders gave impromptu language lessons to teach the protesters the chants in Mandarin. Language has been a key battleground in Hong Kong in recent years with many claiming the pro-Beijing authorities are trying to impose Mandarin on the city as the prime language.

In a move that will inevitably provoke Beijing, the protesters carried signs saying “Welcome compatriots, come with us,” and sang the Chinese national anthem.

“Let the people’s struggle spread to China,” read one poster that had a picture of China’s president Xi Jinping with black ink splashed on his face.

Other leaflets and posters carried detailed information on cases where Chinese human rights lawyers and NGO workers were jailed, while recent environmental protests in the city of Wuhan, the mass detention of Muslim Uighers in Xinjiang and the ongoing plight of the Tibetans were also highlighted as examples of the absence of the rule of law on mainland China.

The tourists seemed to react positively, with many taking leaflets and engaging in brief conversations, while others just waved or gave a thumbs up and moved on.

“They do have a point,” said Wang Lu, an office worker from Jiangsu province. “If you go to court in China you will lose, it’s too late then,” she said. “I personally think the government [on mainland China] is mostly good . . . but the court system is not fair. For sure.”

Another tourist who said his surname was Liu said he thought the demonstrators were very brave, and marvelled at how different life was in Hong Kong. “If you protested like this on the streets in China you would be in jail in five minutes,” he said.

Chinese censors have worked hard to erase or block news of Hong Kong’s biggest and most violent protests in decades amid fears they could inspire demonstrations on the mainland.

The West Kowloon train station where the march terminated is a source of contention as mainland customs and immigration officials are stationed inside, and parts of the station are under mainland jurisdiction even though it is several miles from the border.

The marchers were met at the train station with large barricades and a massive police presence. A day ahead of the protest the train operator stopped selling tickets in and out of the station for most of the day, and closed off public access.

Sunday’s march was the first large-scale gathering since the dramatic events of July 1st when hundreds of demonstrators stormed and ransacked the legislature.

In the aftermath of that event there was concern among the protesters that there might be a split between the radical elements and the more peacefully inclined, meaning the movement could lose momentum, but one march co-ordinator said that had not happened.

“There has been a lot of discussion about this online and offline and while most of us prefer peaceful means we respect that others think at times more extreme measures are needed,” said politics student Karen Ng. “At the end of the day we have the same objective so we need each other.”

Behind her, as the march nudged forward, many carried placards that underlined her point: “Together we stand. We are one.”

Before Sunday more than 70 people have been arrested on charges related to the recent protests, and police say they are currently examining forensic and video evidence and more arrests should be expected.

Protests over the bill have now morphed into calls for Lam to step down, investigations over what some describe as excessive police force and greater democracy.

Hong Kong has been governed under a “one country, two systems” formula since its return from British to Chinese rule in 1997, allowing freedoms not enjoyed in mainland China, including the right to protest and an independent judiciary.

On July 1st, the anniversary of Hong Kong’s return to Chinese rule, protesters besieged and ransacked the legislative building in the heart of the city before being driven back by police firing tear gas. –Additional reporting from Reuters