Explosives are yet to be located within archaeological area, according to investigation 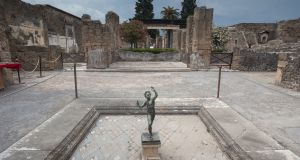 The Pompeii ruins near Naples were discovered in the 16th century, with the first excavations beginning in 1748. Pompeii has become one of the most visited archaeological sites in the world

At least 10 unexploded bombs dropped by the allies during the second World War are hidden within the foundations of the archaeological site of Pompeii, Italian media have reported. In August 1943, allied air forces dropped 165 bombs on Pompeii, in nine different air raids. “Ninety-six bombs were located and deactivated,” the Italian newspaper Il Fatto Quotidiano reported.

“The other bombs ended up in an area of the site that has not yet been excavated. Many of them were defused or had already exploded. But at least 10 of those explosives are still there.”

For the first time, Il Fatto Quotidiano has published exclusive documents from the national aerial photographic archive, including a bombing map, and has reported on interviews with numerous archaeologists and experts. “In 1986, I came across unexploded bombs in Pompeii during some excavations,’’ Antonio De Simone, archaeologist and professor of the Suor Orsola Benincasa University of Naples, told Il Fatto.

“We were there with our chisels and shovels, slowly lifting a handful of earth at a time and suddenly we found the bombs, under our feet. There were two of them. One had already exploded and was reduced to fragments. The other, unfortunately, had not. It was perfectly intact.”

Of the 66 hectares (163 acres) of the archaeological area, only 44 have been excavated. At least 10 unexploded bombs are yet to be found in the 22 remaining hectares, according to the investigation. The Archaeological Museum of Pompeii said: “There is no risk for visitors. The site has regularly drawn up the reclamation project, which is carried out by the military. Area reclamation was carried out per metre.”

But Il Fatto said there was no sign of official documents for the location of at least 10 bombs. Coincidentally, the 165 bombs were dropped by the allies in Pompeii on August 24th, 1943, the same day of the year in AD79 in which the ancient city of Pompeii was believed to have been destroyed by an eruption that killed more than 2,000 people.

In October 2018, however, a newly discovered inscription at Pompeii proved the city was destroyed by Mount Vesuvius, after October 17th, AD79, and not on August 24th, as previously thought. The Pompeii ruins near Naples were discovered in the 16th century, with the first excavations beginning in 1748. It has become one of the most visited archaeological sites in the world. Recent discoveries include: a fresco that portrays an erotic scene from the Greek myth of Leda and the Swan; another one, stunningly preserved, depicting the mythological hunter Narcissus enraptured by his own reflection in a pool of water; the skeletons of two women and three children huddled together in a room; the remains of a horse; and a well-preserved frescoed “fast food” counter. According to statistics from the Italian defence ministry, thousands of second World War bombs are defused in the country every year. – Guardian service

1 Coronavirus: No new Covid-19 deaths reported in State for first time since March
2 Coronavirus: What will reopen in Ireland’s phases to ease restrictions?
3 WHO warns of potential for ‘immediate second peak’ in Covid-19
4 Unconvincing account may take some heat out of Dominic Cummings controversy
5 Archaeologists are ‘quite sure’ they have found Red Hugh O’Donnell’s burial place
Real news has value SUBSCRIBE