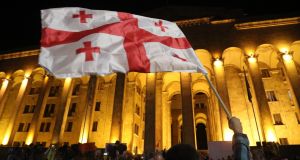 Recent Tbilisi protests: Protesters rallied there again over the weekend to demand the resignation of interior minister Giorgi Gakharia, who they blame for alleged police violence during the June 20th clashes. Photograph: Zurab Kurtsikidze/EPA

Georgia’s president has urged tourists to come to her country, and visitors will soon receive bottles of wine upon arrival in the Black Sea state, as it seeks to soften the impact of a Russian flight ban that is set to start on Monday.

The Kremlin announced a halt to flights to and from Georgia after protesters in Tbilisi, the country’s capital, tried to storm parliament on June 20th when a Russian deputy addressed a forum of politicians from the speaker’s chair.

That enraged many people in Georgia – where Russia won a short 2008 war and still stations troops in two separatist-run regions that it supports – and protests against the nation’s government and Kremlin policies are rumbling on in Tbilisi.

In what Georgia calls an unjustified attack on key sectors of its economy, Russia banned flights over supposed fears for the security of its citizens and also tightened controls on Georgian wine imports due to alleged safety concerns.

The European Union and United States have backed Georgia, which pivoted away from Moscow and towards the West in the 2003 Rose Revolution, but experts fear the clash with Moscow could cost the country’s economy up to $300 million (€267 million) this year.

Georgian president Salome Zurabishvili, who infuriated Russia by calling it an “enemy and occupier” recently, lent weight to a growing campaign to offset the economic damage by attracting more visitors and business from other countries.

Gazing over Georgia’s Black Sea coast and the city of Batumi, Ms Zurabishvili described the subtropical region as “one of the unique places where culture meets beauty”.

“We are all expecting you with Georgian hospitality. Spend your summer in Georgia,” the Paris-born former French diplomat said in a video clip on Twitter.

At the same time, Georgia’s national tourism administration says it is planning to welcome people landing at the country’s airports with a gift of red wine, and has completed a public tender to buy 300,000 bottles of saperavi, a popular grape variety in a region where wine has been made for millennia.

Georgian Airways, meanwhile, has responded to Russia’s ban on its direct flights between Moscow and Tbilisi by rerouting them through neighbouring Armenia, with a 35-minute stop on the tarmac in the country’s capital, Yerevan.

Protesters rallied again in Tbilisi over the weekend to demand the resignation of interior minister Giorgi Gakharia, who they blame for alleged police violence during the June 20th clashes, when more than 200 demonstrators and police officers were injured.

Moscow insists that its response to events in Tbilisi is proportionate, and accuses the West of stirring up “Russophobia” and encouraging radical nationalists in Georgia.

“Russia has not invaded your territory. When your so-called president writes on a social network that Russia is an enemy and an occupier, can you imagine any talks about normal relations?” senior Russian deputy Pyotr Tolstoy told Georgian television on Saturday.

Referring to the separatist-held provinces of Georgia that Russia recognises as independent states, he added: “Abkhazia and South Ossetia will never be part of Georgia again. Remember that very well. They will never be your regions again.”