Trump on British ambassador: ‘We are not big fans of that man’ 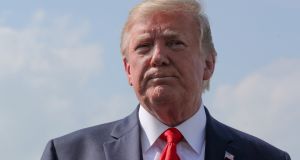 Donald Trump has hit out at the UK’s ambassador to Washington after the leak of sensitive diplomatic messages describing his “inept” administration.

The US president said Sir Kim Darroch had “not served the UK well” and his administration was “not big fans” of the envoy.

A formal investigation will be carried out to determine how the candid and highly embarrassing messages from Sir Kim to the UK government were leaked.

Foreign secretary Jeremy Hunt attempted to limit the damage by stressing the comments were Sir Kim’s “personal opinions” and not the views of the British government.

Mr Trump – who was described as “radiating insecurity” in Sir Kim’s assessment – was clearly annoyed by the leak. He told reporters: “The ambassador has not served the UK well, I can tell you that.

“We are not big fans of that man and he has not served the UK well. So I can understand it, and I can say things about him but I won’t bother.”

Mr Hunt said Sir Kim’s job was to give “frank reports” but the UK’s view was that Mr Trump’s administration was “highly effective”.

The British foreign secretary said: “It’s really important to say that the ambassador was doing his job as an ambassador which is to give frank reports and personal opinions about what’s happening in the country where he works, and that’s his job to send back those reports but they are personal opinions, not the opinions of the British government, not my opinion.

“And we continue to think that under President Trump the United States administration is both highly effective and the best possible friend of Britain on the international stage.”

The documents obtained by the Mail on Sunday detail Sir Kim’s assessments of the Trump administration from 2017 to the present.

Cabinet minister David Gauke condemned the “disgraceful” leak, which will now be the subject of a Civil Service inquiry, and said ambassadors should feel able to “tell the truth as they see it”.

Officials insisted the relationship with the White House could withstand the “mischievous behaviour” of the leak.

The diplomatic memos suggest that in order to communicate with the president “you need to make your points simple, even blunt”.

He questioned whether the White House “will ever look competent”.

Following Mr Trump’s state visit to the UK in June, Sir Kim warned that although the president had been “dazzled” by the pomp and ceremony of the trip, his administration would remain self-interested and “this is still the land of America First”.

In one of the most recent documents, Sir Kim refers to “incoherent, chaotic” US policy on Iran and questions Mr Trump’s publicly stated reason for calling off a retaliatory air strike against Tehran following the downing of an American drone.

The US and Iran have been at the brink of armed conflict over tensions in the Gulf, and Mr Trump stated that he called off a planned air strike with minutes to spare because of the potentially high number of casualties.

But Sir Kim said that the explanation “doesn’t stand up”, and suggested it may have been motivated by Mr Trump’s focus on the 2020 re-election campaign and his previous promises not to involve the US in foreign conflicts.

“It’s more likely that he was never fully on board and that he was worried about how this apparent reversal of his 2016 campaign promises would look come 2020,” Sir Kim said.

He said it was “unlikely that US policy on Iran is going to become more coherent any time soon” as “this is a divided administration”.

In a particularly sensitive leak, a 2017 letter to the UK’s national security adviser Sir Mark Sedwill – sent 150 days into the Trump administration – laid bare the trouble in the White House.

Media reports of “vicious infighting and chaos” were “mostly true” despite the president’s attempts to brush them off.

Referring to the early allegations of collusion between the Trump campaign and Russia, the memo said “the worst cannot be ruled out”.

A lengthy investigation by Robert Mueller published earlier this year cleared the Trump team of the collusion allegations.

“And it is disgraceful that it’s been leaked.”

But Brexit Party leader Nigel Farage – who the US president once suggested would make a great ambassador – said Sir Kim was “totally unsuitable for the job and the sooner he is gone the better”.

This is what Kim Darroch, the British ambassador to the US, is reported to have said in private about Donald Trump.

Comment: Or, to put it another way, the ambassador has read the papers. What Sir Kim Darroch said is not particularly contentious – at least, outside Trump circles .

“For a man who has risen to the highest office on the planet, president Trump radiates insecurity … There is no filter [that prevents Trump making offensive comments] … We could also be at the beginning of a downward spiral, rather than just a rollercoaster: something could emerge that leads to disgrace and downfall.” – Summer 2017

Comment: “Radiates insecurity” is another zinger, which appears to reflect personal knowledge of the president. In an interview with the Financial Times last year Sir Kim gave a slightly different assessment. “I have met [Mr Trump]\ seven or eight times and always found him to be absolutely charming,” he said.

On Trump’s state visit to UK

“The president knew from the outset that it amounted to genuinely special treatment … Although initially worried about getting the protocol right, he became more relaxed as it progressed; and by the end, he could not have been happier or more fulsome in his assessment.” – June 17th 2019

Comment: In this memo Sir Kim says inviting Mr Trump to the UK for a state visit was a “gamble”. But he says from the Washington perspective it was a great success, earning the UK embassy precious extra goodwill from Trump staffers for whom this was “the hottest ticket of their careers”.

On a Trump rally

“As is standard at these rallies, the language was incendiary, and a mix of fact and fiction – hard to reconcile with [Vice President Mike] Pence’s remarks about governing for all Americans … All that said, there is still a credible path for Trump – but so much rides on who the Democrats choose in July 2020.” – June 20th 2019

Comment: Diplomats tend to enjoy trying their hand at reportage and Sir Kim’s description of the Orlando rally – “the atmosphere was unique – somewhere between a major sporting event (where only the home team fans are in the crowd) and a mega-church” – would bring credit to any decent foreign correspondent.

On Trump aborting air strike against Iran at last minute

“[Mr Trump’s]\ claim, however, that he changed his mind because of 150 predicted casualties doesn’t stand up; he would certainly have heard this figure in his initial briefing. It’s more likely that he was never fully on board and that he was worried about how this apparent reversal of his 2016 campaign promises would look come 2020 [at the next election].” – June 22nd 2019

Comment: This is one of the most interesting memos because it is particularly recent. Sir Kim says the embassy was in the dark on the night of the aborted air strike for a while because even its “best contacts” were unwilling to answer calls. He warns a further Iranian attack, involving the loss of American life, could trigger a Trump U-turn. – PA / Guardian