Vietnam says human ‘traffickers must be strictly dealt with’ 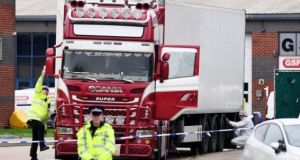 Police and forensic officers investigate the lorry in which 39 bodies were discovered in the trailer a week ago last Wednesday morning in Grays, Essex. Photograph: Leon Neal/Getty Images

Vietnam said on Saturday that human traffickers must be strictly dealt with as the Southeast Asian country was informed that several of its citizens were among the 39 people who died in a truck container in Britain last week.

“The Vietnamese embassy in Britain was informed by Essex police that there are Vietnamese citizens, unidentified, among 39 victims in the lorry incident,” Vietnam foreign ministry spokeswoman Le Thi Thu Hang said in a statement posted on its website.

“Vietnam strongly condemns human trafficking and considers it a serious crime; traffickers must be strictly dealt with,” Hang said in the Saturday statement.

British police said on Friday they now believe all 39 people found dead in the back of a truck in Essex near London on October 23rd were Vietnamese.

Police in Vietnam arrested two people and summoned others for questioning on Friday on suspicion of involvement in the truck deaths.

Ms Hang said in the statement that Vietnam was working closely with British police to verify victims’ identities and called on other countries to cooperate in combating human trafficking crimes.

“This is a humanitarian tragedy,” Ms Hang said.

“We are deeply saddened and we would like to share our deepest condolences to the families of the victims and wish them to overcome this great pain and loss soon.”

According to lead investigator Det Chief Insp Daniel Stoten, officers had spoken by telephone to Ronan Hughes recently but needed to question the brothers in person.

“I want to make a direct appeal,” he said in Belfast yesterday. “Ronan and Christopher, hand yourselves in.”

The Vietnamese embassy in London said it was “deeply saddened” by the findings of Essex police.

“The embassy of Vietnam in London will closely co-ordinate with the relevant authorities of Vietnam and UK to support the families ... to bring their loved ones home.”

Specially trained staff, supported by Vietnamese interpreters, are running a hotline between 9am and midnight, seven days a week, for anyone seeking to make contact.

Police in Vietnam arrested two people yesterday on suspicion of involvement in the deaths. Ha Tinh police also summoned others for questioning as part of an investigation into human trafficking. - Additional reporting from Reuters