What the Boris-Bettel show said about European discourse

Europe Letter: To the British, last week’s podium moment was a humiliation – but they misread the signals 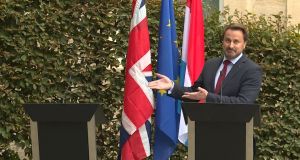 Luxembourg’s prime minister, Xavier Bettel, gestures to an empty podium as he speaks to the press after Boris Johnson ducked out of a planned news conference pn September 16th. Photograph: Kilian Fichou/AFP/Getty Images

When two of its panellists failed to show up, Have I Got News For You famously substituted a tub of lard for the former Labour minister Roy Hattersley and, more recently, an expensive handbag for Tory minister Vicky Morgan.

The tub of lard and teammate Ian Hislop went on to win.

All Xavier Bettel, Luxembourg’s prime minister, needed for no-show Boris Johnson last week was his own equivalent prop for the empty lectern beside him in the courtyard press conference at the Luxembourg foreign ministry. Perhaps a slice of cake for the “have your cake and eat it” British prime minister?

At one point he even addressed the vacant podium as if Johnson were there, dressing him down for causing enormous stress to EU citizens in the UK anxious about their fate.

It was good theatre and Johnson did not come out of it well – a no-win situation for the British PM who, in truth, would have faced headlines just as awkward about being shouted down if he had opted to stay.

But the British media waxed indignant at what it called the “humiliation” of the PM, insisting that Bettel had committed what the Sun called “a shocking breach of protocol”. Laura Kuenssberg, the BBC’s political editor, spoke of the Luxembourg leader “chucking the normal rules of diplomacy out of the window.”

Johnson had been “mocked”, “disrespected”, “dunked on”, treated with discourtesy, we were told by various outlets.

The assumption is that it was simply not on to engage so politically and bluntly with a head of state who should have been treated with polite deference. Nation state rules in an intergovernmental order. You have to tread softly and treat even Donald Trump politely, however difficult that might be.

But times are changing inside the EU. Subtly but surely there has been a shift to a new paradigm.

MEPs have long spoken of their desire to create a single European political space in which debates, parties and leaders engage with each other across national boundaries. And the nature of their discourse is changing, as it clearly did in the recent European elections.

Bettel treated Johnson like he would have treated an opposition politician at home, not as a discourtesy but a measure of the successful evolution of that common European space. Not a slight on the UK’s sovereignty – this is still a Union of nation states – but a reflection of the effect of the entanglements of the two states’ national politics in the common space that is the EU.

Perhaps most striking was Emmanuel Macron’s campaign in the European elections. He fought the elections not so much against Marine Le Pen but against Italian far-right League leader Matteo Salvini and Hungary’s PM Viktor Orban. Not to mention Donald Trump. Macron publicly berated other leaders from the mainstream for failing to take on the common challenge of populism.

Merkel was on board. “Our values mean,” she told a crowd of 6,000 in Zagreb during the election campaign, “that we can be proud of our country and at the same time work to build Europe. ”

Salvini also made no bones about the trans-European nature of the fight, telling supporters rallying just days before the vote that they were fighting “the elites and the powers which have occupied this Europe in the name of finance, of multinationals, of the God Money and of uncontrolled immigration: Macron, Merkel, Soros, Juncker.” No mention of Rome.

Macron was careful not to give hostage to those who want to portray him as an out-and-out federalist. Nowhere does he speak of or to “Europeans”, instead referring to the “peoples” of Europe. The challenge is clear: the nation states persist at the heart of Europe but the creation of a common European political identity, culture and space does not have to contradict that.

These manifestations of the emergence of that new political identity are as yet only straws in the wind. But I think we have to see this political storm in a Luxembourg teacup in a new light, one that our neighbours certainly don’t understand.

“I was astonished and furious,” an irate letter writer to the Yorkshire Post complained, “to see the prime minister of the tiny country of Luxembourg, smaller than the city of Birmingham, treat the PM of our great nation with such utter contempt at a news conference the other day.”

Give me a break.