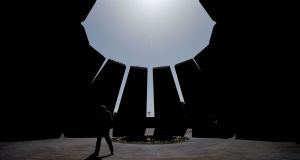 The Armenian Genocide Memorial in Yerevan: There is general agreement hundreds of thousands died – 1.5 million says Armenia but Turkey estimates the total at about 300,000. Photograph: Sergei Gapon/AFP

Turkey is not in the business these days of placating old allies. Its invasion of northern Syria and attempt to crush the Kurds have gone down particularly badly with EU states, although precisely what the US thinks is unclear.

But the argument that public criticism of Recep Tayyip Erdogan’s autocratic rule should be muted to avoid antagonising an essential partner in managing issues like migration and regional stability holds far less sway these days. And Turkey’s attempts to paper over a historic stain on its reputation have taken a setback.

The overwhelming vote in the US House of Representatives on Tuesday – 405 to 11 – to recognise the 1915 massacre of Armenians by Ottoman Turks as “genocide” was overdue. And it was accompanied by a not-unrelated strong support for a motion approving sanctions against those involved in the Syria operation.

The Armenia decision has been a long time coming despite intense campaigning for years by Turkey and its powerful US diaspora.

In 2017, newly inaugurated US president Donald Trump criticised the killings as “one of the worst mass atrocities of the 20th century”, but in keeping with long-standing US practice, he stopped short of using the word genocide. In 2005, when John Evans, the US ambassador to Armenia, said that “the Armenian genocide was the first genocide of the 20th century”, he was recalled and forced into retirement.

To mark the centenary of the massacre in 2015, however, the European Parliament agreed to designate it genocide, and since then 12 EU member states, not including Ireland, have done likewise. A statement from the Department of Foreign Affairs then acknowledged the “terrible events which resulted in the tragic deaths of very large numbers of the Armenian population in the Ottoman Empire”, but avoided use of the word.

There is general agreement that hundreds of thousands of Armenians died – 1.5 million says Armenia, while Turkey estimates the total at about 300,000 – when, to thwart their collaboration with Russia, the Ottoman Turks deported them en masse from eastern Anatolia to the Syrian desert and elsewhere in 1915-1916. They were killed or died from starvation and disease.

At the time, the American ambassador to the Ottoman Empire, Henry Morgenthau, cabled Washington that a “campaign of race extermination” was under way, while the consul in Aleppo, in what is now Syria, described a “carefully planned scheme to thoroughly extinguish the Armenian race”.

Turkey has always disputed that the deaths amounted to a systematic extermination of the Armenian people, which meets the definition of genocide. It claims that atrocities were carried out on all sides during the Balkan wars of 1912 and the first World War.

The word “genocide” did not then exist, but in 1944, Raphael Lemkin, a Polish Jewish lawyer, galvanised by the slaughter of Armenians and by Hitler’s extermination of the Jews, coined the term. It is now enshrined with legal precision in international conventions.

Turkey’s response to the decision in Congress has been furious. Foreign minister Mevlut Cavusoglu on Twitter denounced it as an act of revenge over Turkey’s move against the Kurds. “This shameful decision of those exploiting history in politics is null & void for our Government & people,” he wrote.

“The resolution which has apparently been drafted and issued for domestic consumption is devoid of any historical or legal basis,” Turkey’s foreign ministry said in a statement. “The debate on the events that occurred in 1915 belongs to the realm of history, not politics.”

But politics is nothing but the expression of history in today’s world. All too often states use sanitised narratives of their history, and an insistence that these versions are the only ones that may legitimately be expressed, as a means of delegitimising political criticism. Whole diplomatic campaigns are built around the idea.

Poland has sought to deny the part played by some of its nationals in the Nazi Holocaust by making such talk illegal. Israel has sought international support for redefining as “anti-Semitic” and, therefore beyond the pale, arguments that the foundation of its state is illegal.

China similarly browbeats states into isolating Taiwan with its insistence that it is historically part of the mainland.

EU states should not be cowed by Erdogan on the Kurdish issue any more than on the Turkish version of history. As Samantha Power, the former US ambassador to the UN and author of a major work on genocide, writes in the New York Times, “when bullies feel their tactics are working, they generally bully more . . .

“If Mr Erdogan turns further away from a relationship that has been immensely beneficial for Turkey in favour of deepening ties with Russia or China, it will not be because the House voted to recognise the Armenian genocide. It will be because his own repressive tactics are coming to resemble those of the Russian and Chinese leaders.

“The House vote was overdue. Now the Senate, and President Trump, should follow suit. The facts of what occurred a century ago demand it.”