Common approach to resettling migrants may be on the horizon 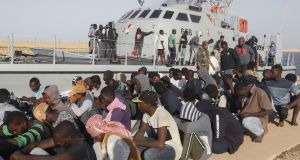 Migrants rescued from the Mediterranean in the city of Khoms, around 120 kilometres east of Tripoli, Libya on Tuesday. Photograph: Hazem Ahmed/AP

It’s nowhere near the 2015-16 migration spike, but the trans-Mediterranean flow of desperate refugees and asylum seekers continues remorselessly, while EU member states show little ability to create the common approach or the solidarity they agree is needed to resettle them.

More than 900 migrants trying to reach Europe have drowned in the Mediterranean so far this year. And the refugee and migrant camps on the Greek island of Lesbos are overwhelmed, while conditions in other holding camps in Libya are horrific. Meanwhile, Turkey appears to be undermining the 2016 agreement under which it had been stemming the flow of migrants into the EU.

Over the last months the refusal by the Italian authorities to allow NGO rescue ships to dock was resolved only through a series of ad hoc agreements by member states to take shares of the refugees, agreements negotiated while those affected languished at sea.

Now, following a Franco-German initiative and a mini-summit in Malta, also involving Italy, an attempt is being made to sign up to a common position on one specific element of the EU’s approach.

Home affairs ministers meeting in Luxembourg next Tuesday will consider proposals for a joint declaration on dealing with the specific challenge of rescued migrants on the central Mediterranean route. Member states will be asked to commit automatically to taking a share of the refugees landed, with the French and Germans indicating that they alone will take roughly half the total.

The prospects for any progress – even this small, temporary step – have been substantially enhanced by the departure from government in Rome of the League party and its leader Matteo Salvini and a significant shift in the new government’s policy, but the tensions between the frontline, receiving states such as Italy, Greece, Cyprus, Malta and Spain, and those expected to share their burden have not dissipated.

Greece and Cyprus worry that the Malta declaration’s limited scope may serve as a pull factor in making the eastern Med route more attractive. Some argue that if it is limited to protecting and resettling only those rescued at sea, and not those who arrive on European shores under their own steam, it may also make the more dangerous sea crossings more attractive.

Making the declaration more ambitious in terms of scope, however, will also make it more difficult to agree and will limit the coalition of the willing participants.

The challenge of agreeing even such a limited approach underlines the even bigger task of reforming the EU’s asylum system, which has floundered over the past five years.

The new European Commission under president Ursula von der Leyen is committed to relaunching, probably in November, discussions of the commission’s old asylum reform package. Five out of seven parts of it are more or less acceptable to all member states, but the most intractable – the reform to the so-called Dublin regulation – remains far from agreed.

Under Dublin, the first EU country that asylum seekers enter is responsible for examining their asylum claim, and Italy and Greece have repeatedly protested against the disproportionate responsibilities that this regulation imposes on them.

Central to reform, its critics say, is “burden sharing”, the allocation of mandatory quotas of asylum seekers to each member state. The Czech Republic, Hungary, Poland and Slovakia fiercely oppose compulsory quotas and denounced these as a clear infringement of national sovereignty. They have successfully held up change, prompting bitter charges that they are “freeloading” and undermining the idea of solidarity as an essential pillar of the union.

Their opposition to a change in Dublin – which can be amended only by unanimity – may yet be circumvented by requiring them to make financial contributions to the costs of resettlement elsewhere.

The deadlock on the issue has seen member states shift their focus to tightening border controls and a stepping up of measures to assist third countries, notably in Africa, to stem the flow.

Those reluctant to reform Dublin argue there is not really a need for a permanent distribution model of asylum responsibility if the number of asylum claims is kept outside of Europe. Hence support for the EU-Turkey agreement and Libyan coastguard training.

Humanitarian organisations are appalled at what they see as collusion in the brutal treatment of thousands of refugees and a turning of backs on the never-ending drownings of desperate people fleeing across the Med for safety and a better life.