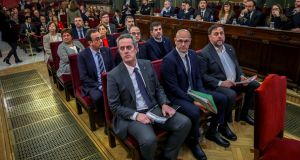 Catalan independence leaders at the start of their trial at the supreme court in Madrid on February 12th. Photograph: Emilio Naranjo/Reuters

Forty-one French senators have denounced what they describe as the “repression” of Catalan politicians by the Spanish judiciary and they have called for the European Union to intervene in Spain’s territorial dispute.

The strongly worded criticism of the ongoing trial of Catalan independence leaders was published in a brief posting on the blog of French senator André Gattolin. The signatories are members of parties from across the political spectrum, including some from President Emmanuel Macron’s En Marche.

The communiqué speaks of “the repression suffered by legitimate elected officials, political representatives of the Catalan government who have been imprisoned or forced into exile because of their opinions in the exercise of the mandates entrusted to them by voters”.

Twelve Catalan leaders have been on trial in Spain’s supreme court since February 12, facing charges related to a failed independence drive in 2017, including rebellion and sedition. Among them are former members of the Catalan government, as well as the former speaker of the region’s parliament.

Nine of those on trial have also been in prison for several months in preventive custody. Several other pro-independence politicians, including former Catalan president Carles Puigdemont, have avoided the Spanish judiciary by fleeing abroad.

Although the senators insist in their text that they are not taking sides on the issue of Catalan independence, they note that “this situation is a real attack on democratic rights and freedoms”. They also call on France and the European Union to “intervene to restore the conditions for dialogue in order to find political solutions to a political problem”.

The Catalan government and the independence movement have consistently claimed that the supreme court trial is a politically motivated attempt to muzzle secessionism rather than a credible exercise of justice. The French senators’ statement therefore represents a notable victory for a movement that is constantly seeking international support.

However, the French government distanced itself from the text, endorsing the Spanish authorities’ insistence that the judiciary is credible. In a Twitter post, Nathalie Loiseau, French minister for European affairs, said Spain was a country that enjoyed the rule of law and one “in which nobody – not even members of parliament – should meddle”.

Mr Macron has been supportive of the Spanish government on the Catalan issue. Former French prime minister Manuel Valls, who is Catalan, is running as a candidate for mayor of Barcelona with the backing of the stridently unionist Ciudadanos party.