Should Theresa May get her deal with the EU approved by House of Commons next week, the UK will get until May 22nd to leave bloc

The EU is set to allow an extension of article 50 process until May 22nd, according to draft statement. Video: European Council 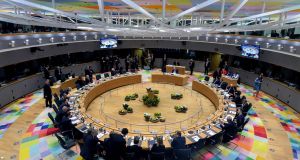 EU leaders have agreed an unconditional extension until April 12th to the UK Brexit negotiating process.

Should British prime minister Theresa May succeed, however, in getting her deal with the EU approved by the House of Commons next week, the UK will get until May22nd to pass the required legislation to allow an orderly departure from the EU.

In a debate that extended long over schedule and continued over dinner in Brussels on Thursday night, leaders of the EU27 also approved the text of assurances agreed between the EU and UK in Strasbourg last week.

The leaders’ decision means the UK will not now be leaving the EU as scheduled next Friday at 11pm.

The UK will also be required to indicate before April 12th if it wishes to participate in the European Parliament elections on May 23rd, at which point EU leaders would convene a summit to decide whether a further extension to its membership of the EU is acceptable.

If it does not notify of its intention to participate in the elections by then, or if the leaders find the UK’s justification for a further extension to Brexit unconvincing, the UK will leave the EU on April 12th.

In the interim the British government can make further attempts to secure Commons passage of the withdrawal agreement agreed with the EU in November, and the linked political declaration on the future relationship.

Or indeed, as EU leaders have repeatedly suggested in recent days, it can seek an alternative to the political declaration that would secure broader Commons support – which would inevitably mean a repudiation of key British red lines.

Mrs May spoke to the summit for half an hour and was pressed for another hour with questions by the leaders, before leaving the 27 to their deliberations. But she declined to speculate when asked about what she would do if the Commons again votes down the withdrawal agreement.

The Financial Times reported one senior diplomat saying that a frustrated French president Emmanuel Macron asked Mrs May: “Theresa, where are we going?” Mr Macron had made clear his opposition to granting the UK a lengthy extension.

Leaders in their debate disagreed over whether to make the offer of an extension conditional on passage of the withdrawal agreement in the Commons. Early drafts of the European Council conclusions included conditionality.

The formal approval of the Strasbourg assurances by the council should assist Mrs May in arguing that there are significant changes to the deal that has twice been voted down, enabling it to be put to the Commons again.

The council once again also declared in its formal “conclusions” that the EU would not renegotiate the Brexit divorce terms included in the withdrawal agreement.

Speaking earlier to the summit, European Parliament president Antonio Tajani expressed the frustration of many of the leaders. “We have shown great patience, given additional assurances and drawn up legal interpretations, as we have been asked to do. And all for nothing it would seem,” he said.

If the UK was prepared to demonstrate flexibility, however, “If the UK Parliament can succeed in changing the red lines, for example by asking to retain membership of the Customs Union, then the backstop too will cease to be such a thorny issue,” Mr Tajani said.