Ayelet Shaked, who has worked to overhaul judiciary, says she was poking fun at herself 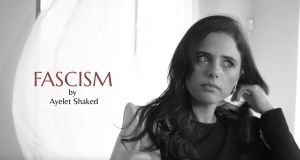 Israel’s right-wing justice minister Ayelet Shaked has hit back at critics after she was lambasted for featuring in a spoof election campaign ad, ostensibly promoting a perfume called “Fascism”.

The firebrand minister, number two on the New Right list headed by education minister Naftali Bennett, devoted her term in the outgoing government trying to reform Israel’s judiciary – seen by the right as a bastion of Israel’s left-wing, liberal elite – and says she wants to continue in the same role if New Right is part of the next coalition after the April 9th election.

Her critics on the left often deride her policies, labelling them as fascist.

The controversial video clip is entitled “Fascism by Ayelet Shaked”. In the 40-second, slow motion, black and white video clip, Shaked, impersonating a model, walks past a hanging picture and descends down a bannister before picking up a bottle of “Fascism” perfume. In the background a female narrator mentions some of Shaked’s policies such as “Curbing the supreme court”, “appointing judges” and “separation of powers”.

At the end of the clip, after spraying herself with “Fascism”, Shaked turns her gaze to the camera and says: “Smells like democracy to me.”

The launch of the mock advertisement coincided with the start of the Jewish festival of Purim – which celebrates the saving of Jews in ancient Persia– when Jews wear fancy dress and spoofs and practical jokes are commonplace.

Many on social media warned that the satire in the ad would not be picked up by international YouTube viewers and predicted the clip would be used by Israel’s enemies.

It appears that the BDS (Boycott, Divestment, Sanctions) movement, which promotes economic, academic and cultural isolation of Israel, was the first who failed to recognise the humour. The organisation reposted the clip, commenting “You can’t make this stuff up.”

“As a partner to a campaign like this, you are helping chauvinist men who choose to see women as an object of beauty and nothing else,” said Pnina Tamano-Shata, a candidate with the centrist Blue and White Party party.

“It’s a nice clip aimed at the liberal left that has for years called me a fascist but keeps losing elections,” she said. “I’m poking fun at myself. People should take themselves a little less seriously.”

Ms Shaked, together with Mr Bennett, split from the right-wing Jewish Home party in December to form the New Right as an alternative to prime minister Binyamin Netanyahu’s ruling Likud party. However, the party has failed to make a dramatic impact, hovering around the six-seat mark in the 120-seat Knesset, according to polls.