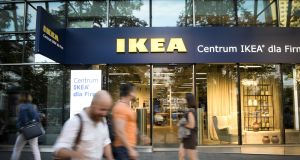 An Ikea store in Warsaw. The case of the worker fired for posting biblical quotes condemning homosexuality on the company intranet has been embraced by Poland’s ruling party and Catholic bishops. Photograph: Jaap Arriens/NurPhoto via Getty Images

Ikea in Poland is facing boycott calls after it fired a man who posted on its internal computer network biblical quotes condemning homosexuality.

The man, identified by Polish media only as Tomasz K, uploaded texts from the Book of Leviticus and Gospel of Matthew during a day of solidarity last May with the LGBT community.

Asked to remove the posts from the intranet, he refused, was fired and is now suing Ikea on grounds of religious discrimination.

“I was shaken up,” he told state news channel TVP Info. “I was hired to sell furniture but I’m a Catholic and these aren’t my values.”

His case has been embraced by Poland’s ruling national Law and Justice (PiS) party and Catholic bishops.

The dispute began on May 16th – International Day against Homophobia, Biphobia and Transphobia – when Ikea encouraged employees to engage in conversations with LGBT customers about their family life and to ask transgender customers by which pronoun they preferred to be addressed.

In protest the man posted verses from the Gospel of Matthew, saying it would be better for someone who causes scandal to “tie a millstone around his neck and plunge . . . into the depths of the sea”. He also posted from Leviticus 20:13: “If a man lies with a male as with a woman, both of them have committed an abomination; they shall surely be put to death; their blood is upon them.”

Ikea defended terminating his employment, saying quotes “about death and blood” of homosexuals could “impinge on the dignity of LGBT people”.

Poland’s Catholic bishops, grappling with a growing clerical child sex abuse scandal, congratulated the ex-Ikea employee for his courage in defending his faith in an “exemplary” way.

“From the point of view of the law and above all of propriety and common sense, it is unacceptable to attack the Ikea employee who refused LGBT indoctrination in the workplace,” said the Polish episcopate in a statement, accusing Ikea of “projecting virtual reality and imposing its beliefs from a privileged position”.

Poland’s national conservative government has also joined the debate, with one party politician floating the idea of an Ikea boycott.

Ahead of autumn elections, the row has fed into a growing campaign by the ruling party against homosexuality and gender isues, which it has identified as a “grave danger” for Polish traditional values.

Justice minister Zbigniew Ziobro, who also oversees Poland’s public prosecutor, said the case illustrated how foreign-owned companies “discriminate” against Poles holding traditional Catholic values. He said the case may “interfere with a sphere of values protected by Polish law that guarantees freedom of conscience and religion to every citizen”.

Instructing prosecutors to examine possible infringements of labour and criminal law, he added: “We’re dealing with a phenomenon of using economical and legal violence against all those who don’t want to share the values of homosexual activist environments”.

Ikea holding company Ingka Group said in a statement it believes everyone has the right to fair treatment and equal opportunities regardless of gender, sexual orientation and gender identity, age, nationality, religion or any other part of their identity.

It added that “using your religious background as a reason for excluding others is considered discrimination”.

Ikea opened in Poland in 1991 and local companies produce about 4,000 products for the company’s global range.

The Book of Leviticus is a popular reference point for religious condemnation of homosexuality. Among the other rules handed down in its pages, from God to Moses: the death penalty for anyone committing adultery or incest; penalties for tattoos and certain styles of beard-trimming; and a ban on consorting with blind people and dwarves.