US proceeding with plan for coalition to deter Iran threats 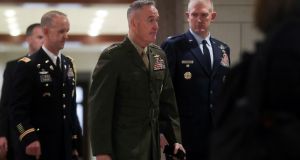 The US will move ahead with plans to build a coalition of nations to monitor and deter Iranian threats against commercial shipping in the Persian Gulf area and in a waterway around Yemen, a top military officer has said.

Marine General Joseph Dunford, the chairman of the US joint chiefs of staff, said the Pentagon has developed a specific plan, and that he believes it will be clear within a couple of weeks which nations are willing to join the effort.

Mark Esper, the acting secretary of defence, raised the issue last month with allied officials at Nato headquarters, but no nations were ready to commit to participating.

Mr Esper said at the time that the plans would have to be further refined.

Gen Dunford said he discussed the matter on Tuesday with Mr Esper and secretary of state Mike Pompeo, and that plans are coming together.

“We’re getting ready now to move out,” Gen Dunford told a small group of reporters at Fort Myer, Virginia.

“We have a pretty clear concept of what we want to do.”

He suggested that the project could begin with a small coalition.

“This will be scalable. So, with a small number of contributors, we can have a small mission and we’ll expand that as the number of nations that are willing to participate identify themselves,” he said.

He said the US military’s main role would be to provide “maritime domain awareness” – intelligence and surveillance information – to the ships of coalition partners that would conduct patrols in vulnerable waterways like the Strait of Hormuz, which separates the Persian Gulf from the Gulf of Oman, as well as the Bab el Mandeb, a heavily trafficked strait between Yemen on the Arabian Peninsula and Djibouti and Eritrea in the Horn of Africa.

Any escorting of commercial ships would be done by military ships sailing under the flag of the commercial vessel, he said.

The initiative was triggered last month by Trump administration concerns that Iran was behind recent attacks on commercial ships in the Persian Gulf region. –AP