South Sudan eight years on: ‘I can’t believe I would go back’ 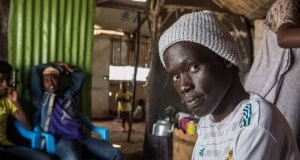 Majok Lam from South Sudan in Kakuma refugee camp, northwest Kenya, in October 2018: would like to return home with an education. Photograph: Sally Hayden

“I feel the independence day is a significant one in South Sudan’s story, despite all the setbacks,” he said.

The 23-year-old left his birth country when he was just 17 – one of more than two million refugees who fled a devastating civil war that turned the successful liberation of the world’s youngest country into a nightmare for many.

South Sudan became independent in 2011. Conflict broke out in December 2013, after the president, Salva Kiir Mayardit, accused his former deputy, Riek Machar, of trying to oust him. Machar then fled to lead an opposition movement against him.

Hundreds of thousands of people have since been killed, and fighters on both sides of the conflict have been accused of brutal war crimes.

Speaking by phone from the South Sudanese capital, Jale Richard, the news editor of Juba Monitor, said most locals spent independence day at home with their families.

“There is no official celebration for the fourth year in a row and some people are sad because of it. To many, there is nothing to celebrate given that the local currency keeps on losing value every day and civil servants’ salaries take months to be paid,” he said.

“The biggest concern is the lack of peace. Despite the signing of the peace agreement last September, insecurity exists in some parts of the Equatoria region and displaced people fear to return home.”

Last September, a peace deal and power-sharing agreement was signed, and the UN says progress is being made.

Richard compared the agreement to the August 2015 peace deal that collapsed shortly afterwards, saying this time people are more optimistic, though they will need to wait to see if it holds. “I think what is lacking is real work on the ground, especially containment of forces.”

About 1.9 million people have been displaced within the East African country.

Richard, who has travelled to many camps for the displaced, said South Sudan’s people were very keen to return home, but their hopes lay in the proper implementation of the deal.

This year, aid agencies say about two-thirds of the population of 12 million are in need of humanitarian assistance – the same number as in 2018.

“The repercussions of the conflict continue to affect many people’s lives,” said Claudio Miglietta, head of mission for Médecins Sans Frontières in South Sudan.

“People are still affected by some of the conflict’s less tangible consequences. Many people have witnessed extreme levels of violence, have lost or been separated from family members or face uncertainty about their futures.”

Lam definitely feels like that. He doesn’t like to talk about the war. “There is nothing for people to know about the war back home since it brings only destruction [and the] loss of lives,” he said.

From Kakuma, a remote refugee camp of 180,000, he also can’t imagine returning to South Sudan any time soon.

“I can’t believe I would go back easily, because as a young guy growing up I don’t see any better education or security in the country.”

Like many other refugees though, Lam still has a love for his country and fond memories of the two years of peaceful independence they enjoyed before the war broke out.

After he manages to get an education somewhere safe, he says he’d like to make sure South Sudan benefits.

“Even me, I’m very optimistic if things go back on track,” Lam said. “I love my country and [would] go back to contribute to its development.”