Criminalisation of migrant rescue at sea backed by Dutch parties 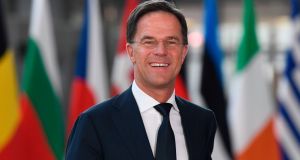 Five parties in the Dutch parliament, including prime minister Mark Rutte’s Liberals, have come together in support of a controversial motion that would make it a crime to rescue migrants from drowning at sea – despite international treaties that say it’s an obligation.

The Liberals have tabled the motion. It has the support of their centre-right allies, the Christian Democrats, and by three right-wing parties, Geert Wilders’ Freedom Party, the fledgling Forum for Democracy and the orthodox Calvinist party, SGP.

The support of the five parties already gives the motion a majority of 77 in the 150-seat house – as the centre-right competes with the right to adopt an ever-harder line aimed at preventing a repeat of the mass migration of refugees towards western Europe in 2015.

Not alone has the motion thrown the Liberals and Christian Democrats together with the far right, but it has also split the four-party coalition government right down the middle – with the two “junior” partners, centre-left D66 and the conservative Christian Union, opposing the proposed law.

What makes the issue so contentious here – apart from the perennial battle for right-leaning voters – is the fact that the migrant rescue ship, Sea Watch 3, operated by an NGO based in Germany and with a German captain, is registered in the Netherlands.

Last week, an Italian judge released the captain, Carola Rackete, from house arrest after she defied an Italian closed-ports policy and landed 40 migrants on the Sicilian island of Lampedusa to receive medical treatment for heat stroke and exhaustion.

The 1982 UN Convention on the Law of the Sea established the obligation for vessels to respond and offer assistance to people and other ships in distress on the high seas, and the judge found Ms Rackete (31) had “acted in accordance with her duty to protect human life”.

However, this cut no ice with Dutch Liberal MP Jeroen van Wijngaarden, who drew up the motion to criminalise such rescues.

Mr van Wijngaarden said he wanted the law to ensure that rescue missions were not used “to facilitate human trafficking”.

He said the proposed change would provide that where it could be shown that an NGO had overstepped the mark and was arguably guilty of “promoting illegal migration”, those responsible could be liable to up to four years in jail or a fine of up to €83,000.

He added: “All the parties are faced with answering this question: how do you prevent a rescue ship from becoming a ferry service for illegal migrants?”

Spokespersons for D66 and Christian Unity said they were “firmly opposed” to the law change. It was not on the coalition’s agenda, they said, and they would block it on that basis.