July 9th, 2019: Boris Johnson and Jeremy Hunt clash over which of them, as British prime minister, could be most trusted on Brexit in a sometimes bad-natured TV debate. Video: ITV/Reuters 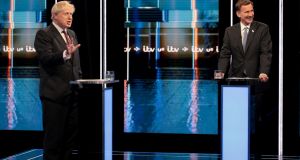 Boris Johnson and Jeremy Hunt go head to head on ITV’s debate: “If you don’t get us out of the EU on October 31st, will you resign?” Mr Hunt asked his rival. Photograph: Matt Frost/ITV

Boris Johnson and Jeremy Hunt clashed over Brexit, Donald Trump and tax policy in a fiery, hour-long Conservative leadership debate on Tuesday night. The ITV debate, which was the first televised encounter between the two candidates, saw Mr Hunt go on the attack against the frontrunner from the start.

“If you don’t get us out of the EU on October 31st, will you resign?” he asked Mr Johnson.

Mr Johnson has promised Britain will leave the EU at the end of October “do or die” but he repeatedly refused to say that he would resign if he failed to deliver on the promise.

“I think it’s very, very important not to envisage any circumstances in which we would fail to come out of the EU on October 31st. I don’t want to hold out to the EU the prospect that they encourage my resignation by refusing to agree a deal,” he said.

“If we go into these negotiations from the beginning with a plan to allow that that deadline yet again to be fungible, to be a papier-mache deadline, I’m afraid that the EU will not take us seriously. Nor will business understand that they must prepare for no-deal.”

Mr Hunt taunted Mr Johnson over dodging the question – “It’s not do or die, is it? It’s Boris in No10 that matters” – and said he would not make promises he could not keep. Accusing Mr Johnson of “peddling optimism”, Mr Hunt warned that a no-deal Brexit would be highly disruptive for British business, asserting that he has an effective plan to protect the hardest-hit sectors.

Minutes before the debate began, MPs passed by a majority of one vote an amendment aimed at blocking the next prime minister from suspending parliament to push through a no-deal Brexit. Former Conservative attorney general Dominic Grieve’s amendment to a Northern Ireland Bill requires the government to update parliament during September and October on progress in power-sharing talks.

Mr Hunt said he would not suspend parliament, but Mr Johnson said he would not take any option off the table in delivering Brexit. The two men also clashed over Donald Trump’s decision to stop dealing with Britain’s ambassador to Washington Kim Darroch after leaked emails from Sir Kim critical of the White House.

Mr Hunt criticised Mr Trump and promised to leave Sir Kim in his post until he is due to retire early next year, adding that no other country could determine who Britain sends as its ambassador.

“If I am the next prime minister, the ambassador in the United States stays because it is our decision,” he said.

Mr Johnson refused to offer that commitment, trumpeting instead his friendly relations with the US president.

Mr Johnson is far ahead in polls of Conservative members, who received their ballot papers last weekend. Many will have voted already but Mr Hunt’s team hopes that his strong performance in the ITV debate and Mr Johnson’s shifty approach to answering questions will make voters reflect on their choice.

Although Mr Hunt’s campaign believes he has strong support in Scotland and that many Conservative members are uncomfortable with the idea of Mr Johnson as prime minister, it would take a miracle to overtake the favourite now. Mr Johnson’s supporters acknowledge privately that anything short of 60 per cent would be a disappointment.

Winning more than 40 per cent could secure Mr Hunt’s hold on one of the great offices of state, perhaps allowing him to remain in the foreign office. That could leave him well-placed for the next leadership contest if the doubts he expressed on Tuesday night about Mr Johnson’s prospects as prime minister prove to be prophetic.