EU summit: The players, proposals and what’s at stake 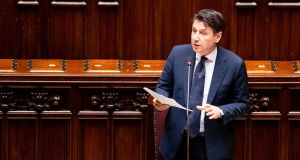 European Union leaders will meet over video conference on Thursday in a bid to bridge deep divisions over how to finance the response to the coronavirus pandemic, an issue some have warned has put the future of the union at stake.

On the table is the contentious issue of how to pay for a recovery fund to dig the continent out of an economic slump, caused by the pandemic, that is expected to be the worst in a century.

The issue is the subject of deep philosophical differences between member states, and was left unresolved when finance ministers agreed to a €540 billion package of funding measures earlier this month.

Leaders will also attempt to reach a deal on the bloc’s seven-year budget, which they had failed to agree on prior to the pandemic due to a split over whether funding to it should increase or not.

Is the future of the EU really at stake?

Leaders including French president Emmanuel Macron have warned that the future of the euro currency area and the bloc itself hangs in the balance, and have demanded dramatic action to counter public disillusionment with the union and the rise of eurosceptics in national politics.

But some old hands say claims that the EU is at a make-or-break moment are perennial, underestimate how deeply embedded the union is, and are often used by national leaders to exert political pressure to get what they want.

Nevertheless the EU does face deep challenges. Some of its most treasured achievements are suspended, with citizens unable to travel freely from one country to another. The coronavirus has highlighted divisions between the bloc’s members, including on what the future of the union should be. And the European project has become the subject of deep rancour in one of its founding member states as it finds itself in deepening financial trouble: Italy.

Why is Italy central?

Concerns about Italy going bust long predate the coronavirus pandemic. Its debt stood at 135 per cent of annual national output last year, the highest levels in Europe after Greece, and there have been warnings this could rise close to 160 per cent by December.

It’s a precarious position for a country that has hardly grown economically in two decades, and that has now become the country in Europe hardest and longest hit by the pandemic, with the number of recorded deaths at 25,000 and rising. The Italian budget watchdog warns the economy will shrink by 15 per cent in the first half of the year, a contraction “never before recorded in the history of the republic”.

Italy has had to pay higher and higher costs to borrow money to fund its spending as the crisis hit because investors view it as a risk, a situation that threatens to become a debt spiral. An announcement by the European Central Bank that it would step in to buy debt to bid down interest rates has not stopped Italian bond yields rising amid market nervousness ahead of the summit.

That is why the Italian government has been adamant in demanding the EU agree to issue jointly guaranteed debt, which would allow it to borrow at lower rates. It argues that this is in the interest of all EU states to protect their own economic interests, and that a major demonstration of solidarity is vital to counter the risk of eurosceptic parties coming to power, driven by deep public disillusionment due to years of economic stagnation and a sense of abandonment by Europe.

As the EU’s third-largest economy, Italy going under is a much greater threat to the bloc and to the euro zone than the Greek sovereign debt crisis of the last decade. It could be described as “too big to fail”.

How are member states divided?

The Netherlands represents the opposite pole of opinion to Italy, leading a group of “frugal” states like Austria that want a cheaper EU and are staunchly against jointly backed debt as they fear ending up on the hook for the loans of weaker economies.

Dutch finance minister Wopke Hoekstra has made himself a reputation as a hardliner, and insists that emergency loans, such as through Europe’s bailout fund, should come with the condition that countries should balance their national budgets.

Shared debt in the form of euro bonds were an Italian ambition long before the pandemic hit. Ireland was among nine member states to support the idea, but it doesn’t have enough backing to be approved.

What deal is on the table?

The European Commission has proposed a compromise that makes the recovery plan part of the budget. States would front extra funding into a pot, and the commission would borrow against this to raise additional money on financial markets. German chancellor Angela Merkel has indicated her support.

But there is disagreement on various details, including on how the commission’s debt would be repaid. One proposal is to give the commission the power to raise its own revenues to make repayments through levying digital or plastic taxes, but this is fraught with potential political roadblocks.

Where does Ireland stand?

Ireland supports shared debt but isn’t fundamentalist in its position. Above all it wants a recovery plan that can be put in place quickly.

One issue of concern is a turn towards protectionism, which Ireland criticised in a paper circulated last week. A letter from the European Council and commission published ahead of the summit said the bloc should “reduce over-dependency on third countries”, which goes against Ireland’s highly globalised economic model and commitment to free trade.

Dublin will also defend long-running positions such maintaining funds for agriculture. The idea of a digital tax rings alarm bells, as it is feared as a threat to Ireland’s attractiveness to multinational tech companies.

What are the potential outcomes?

Few expect a major breakthrough to come from the summit. Any agreement is likely to be a list of principles, which will then be passed to the technical experts of the commission to be fleshed out in detail, before going back before national finance ministers for further fine-tuning. Much will depend on the detail, and the potential for future fallouts is strong,

There are strong incentives for some kind of an agreement to be announced, as a failure to agree would likely shock financial markets and deepen Italy’s trouble on the bond markets.

But the same could happen if markets do not find the agreement that emerges convincing. With deep political splits, whatever is agreed will be a careful weaving together of the political demands of 27 states, which doesn’t always result in the most practical outcome.

“It won’t keep everyone happy,” one official predicted. “But it might be enough to keep the show on the road.”

For further analysis ahead of Thursday’s EU summit: