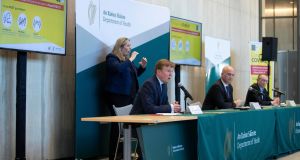 There were another 49 coronavirus-related deaths announced by State health officials and a further 631 new cases of the disease reported on Wednesday.

This brings the death toll to 769 laboratory-confirmed Covid-19 related deaths in the State after validated data resulted in the “denotification” of 10 deaths previously thought to be Covid-related.

The National Public Health Emergency Team (NPHET) at the Department of Health reported a further 113 “probable or suspected” Covid-19 related deaths in long-term residential care settings, including 102 in nursing homes.

This brings to 882 the total number of deaths that may be related to the flu-like disease.

The vast majority of the 769 lab-confirmed deaths have been amongst the elderly.

Community residential settings account for most deaths, with 412 or almost 54 per cent of the 769 laboratory-confirmed Covid-19 deaths.This includes 348 deaths or 45 per cent who were residents of nursing homes, one of the sectors worst affected by the disease.

Some 386 deaths occurred in a hospital setting, including 50 in intensive care units. There were underlying medical conditions in the cases of 645 people who died, or 84 per cent of deaths.

Dr Holohan urged people to continue to adhere to the Government’s guidelines to stay at home and to keep social-distancing and cocooning to prevent the spread of the virus.

He told reporters that NPHET, which advises the Government on public guidance, would not, based on current figures on confirmed cases, be recommending any change to the restrictions that will remain in place until Tuesday, May 5th, the day after the May bank holiday weekend.

“There should be no anticipatory slacking off in advance of May 5th,” Dr Holohan said.

“We have a way to go; you have seen the number of cases.”

The State’s top health official warned that although there was “plenty to encourage us” including the reduction in the rate of infection and the fact that the State had not been impacted as badly affected other countries, this should “give us no grounds for complacency.”

Dr Holohan said that if there was a change in people’s behaviour because they thought the State was in a much better position now, “we could lose all of the ground we have made.”

Within a period of two to three weeks, State health officials could start to see “very significant change” in terms of the path of this infection if people’s behaviour changed, he said.

Asked about the change in advice that healthcare workers should wear face masks in a majority of hospital settings, Dr Holohan said that NPHET’s expert advisory group had kept this issue under constant review and that the team had accepted the group’s change in advice on this.

He acknowledged that this would “drive up” demand for personal protective equipment but he said he was confident that the HSE would be able to continue to provide this equipment.

Nonetheless, Dr Holohan urged any domestic companies who may be able to switch their production to the manufacturing of PPE to do so in order to help the HSE.

The expert advisory group was assessing whether masks should be worn in “a more general setting” and that NPHET would take the group’s advice on this, he said.

Late on Wednesday night it emerged that GPs have been told that they must wear surgical masks for consultations with patients who are not showing symptoms of Covid-19 or even suspected of having the coronavirus disease.

The new guidance, from NPHET, has led to the Irish College of General Practitioners (ICGPs) warning the HSE that the current allocation of 50 masks per GP per week “will not be sufficient.”

The ICGP told the country’s GPs in a notification issued on Wednesday that the change in policy “has implications” for the supply of PPE to GPs.

Earlier on Wednesday, Minister for Finance Paschal Donohoe has said the Covid-19 support payments would likely be “tapered” and “changed” when the 12 week period is up.The Covid-19 Wage Subsidy Scheme, which started on March 26th, allows employers to continue to pay their employees during the crisis. It is set to end on May 7th.

“Many of the measures that we have in place at the moment from an economic point of view - we cannot sustain them indefinitely, but we will be able to sustain them for long enough to allow incomes to continue to be protected where possible and to give over 40,000 companies that are currently in our income subsidy scheme a fighting chance of returning to economic and business health.”

The country is facing “considerable economic challenges,” but he and the Taoiseach want to avoid cuts to social welfare rates.

The Minister predicted that peak unemployment will reduce to 14 per cent by the end of the year.

“As we go into next year it should drop further.”

Speaking on Tuesday, Mr Donohoe said the coronavirus crisis had resulted in a “severe recession” with unemployment soaring to a record 22 per cent – an economic shock without precedent in modern times.

The deaths of another 44 patients – 18 males and 26 females – diagnosed with Covid-19 were reported on Tuesday by NPHET.

There have now been 730 Covid-19 related deaths confirmed by laboratory tests in the Republic. However, a further 108 probable or suspected deaths in care settings was reported by NPHET on Tuesday.

The Government is considering an easing of restrictions every two to three weeks after a possible initial easing off from May 5th. This would allow for an assessment of how any changes were affecting the spread of the virus.

Some easing of cocooning measures for the over-70s, as well as the re-opening of DIY stores, are seen as the likeliest options for the first wave, as well as clarity on how schools could partially reopen. People may also be allowed travel further to exercise, it was suggested.

Speaking on RTÉ’s Prime Time on Tuesday night, Taoiseach Leo Varadkar said the Government would outline its plan before May 5th and it would be considered by Cabinet by the end of April.

In advance of any such move, the Government on Tuesday announced it was extending a ban on mass licensed gatherings of more than 5,000 people until the end of August, giving event organisers notice that concerts and other festivals were off for the summer.

Meanwhile, the chairperson of the Policing Authority Bob Collins told RTÉ radio’s Morning Ireland that he wants “explicit guidelines” about the circumstances in which the spit hoods can be used on teenagers.

Mr Collins said the authority was worried that garda procedures state only that the hoods are not to be used on children under 12 and was “silent” on their use on children aged 12-18.

He said he had requested clarification from Garda Commissioner Drew Harris on the issue and wants the use of spit hoods to be recognised as a “use of force”, which requires a process of open reporting.

Mr Collins also said he was “somewhat reassured” by the Commissioner’s “clear indication” that the use and availability of anti-spit hoods will be strictly limited to the current crisis.

He also disputed the accuracy of figures “in the public domain” about the number of spit hoods that have been ordered, but did not clarify the number.