Coronavirus: Most countries still in ‘early stages’ of pandemic, says WHO chief

At least 178,371 people dead from virus as global cases pass more than 2.5 million 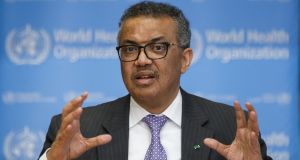 WHO director-general Tedros Adhanom Ghebreyesus: ‘This virus will be with us for a long time.’ Photograph: Salvatore di Nolfi/EPA

The head of the World Health Organization (WHO) said on Wednesday that he hoped the Trump administration would reconsider its suspension of funding, but that his main focus was on ending the pandemic and saving lives.

There were “worrying upward trends” in early epidemics in parts of Africa and central and South America, WHO director-general Tedros Adhanom Ghebreyesus said.

“Most countries are still in the early stages of their epidemics and some that were affected early in the pandemic are starting to see a resurgence in cases,” Tedros told Geneva journalists in a virtual briefing.

“Make no mistake we have a long way to go. This virus will be with us for a long time,” he said, while noting that epidemics in western Europe appear to be stabilising or declining.

US president Donald Trump last week criticised the WHO’s handling of the coronavirus pandemic and announced he was suspending funding to the UN agency. US secretary of state Mike Pompeo on Wednesday said the United States strongly believes that China’s ruling Communist party failed to report the outbreak of the new coronavirus in a timely manner to the WHO.

The WHO officials urged countries to continue investing in preparedness, saying that only 76 percent had surveillance systems to detect cases.

“There are still many gaps in the world’s defences and no single country has everything in place,” said Mr Tedros.

At least 178,371 people have died in the coronavirus pandemic so far, according to data from Johns Hopkins University.

There are more than 2.5 million confirmed cases worldwide.

The number of people who have died from coronavirus infection in France increased by 544 to 21,340 on Wednesday, the fourth-highest casualty tally in the world, but trailing just a few hundred behind Spain, which has a death toll of 21,717.

In total, France has 155,860 confirmed or possible cases of coronavirus infection, compared to the more than 208,389 reported in Spain.

The country’s prime minister said the government would unveil plans for the gradual reopening from lockdown before the end of this week.

But the number of people currently infected with the virus fell by 528 to 107,709, the first significant fall since the outbreak began.

The number of people who have died in hospitals in the United Kingdom after testing positive for the coronavirus has risen to 18,100, the health ministry said on Wednesday, an increase of 763 on the figures published 24 hours earlier.

The 763 increase is down from 828 in the previous period.

Spain saw its death total reach 21,717 cases as its government weathers criticism about how it will let children out of a six-week lockdown.

Spain’s health authorities said on Wednesday that 435 more people have died in the last 24 hours. Authorities also reported 4,211 new confirmed infections, taking the total to 208,389 cases since the start of the pandemic.

Yielding to pressure from some parents, prime minister Pedro Sanchez announced on Sunday that children would be allowed out as of April 27th, without specifying the exact rules for the outings.

Mr Sanchez is appearing before Spain’s Parliament on Wednesday to ask for a third two-week extension of the state of emergency that has given his government extraordinary powers to confine the country. The main opposition party has conditioned its support on a proper explanation of what children can do next week.

The number of people who have tested positive in the Czech Republic has surpassed 7,000 as the country eases restrictive measures adopted to contain the pandemic.

Overall, 7,041 Czechs were infected with the virus, according to health ministry figures released on Wednesday, while 204 have died. The health authorities registered 133 new cases on Tuesday as 8,301 tests were conducted that day. That is down from 154 cases the previous day.

US president Donald Trump has announced a 60-day ban on immigrants seeking to live and work in America permanently, and said he could extend it depending on the economic fallout from the coronavirus pandemic.

Mr Trump framed the executive order, which he expects to sign on Wednesday, as an effort to protect American workers from foreign competition.

He said it would apply only to those seeking green cards and not temporary workers, but he did not explain how those whose applications are currently being processed would be affected.

The “pause” would be in effect for 60 days, he added, after which the need for an extension or alternation would be reviewed “based on economic conditions at the time”.

Meanwhile, the US state of Missouri sued China’s leadership over coronavirus, seeking damages over what it described as deliberate deception and insufficient action to stop the pandemic.

Eric Schmitt, the state’s Republican attorney general, said in a written statement that the Chinese government lied about the dangers of the virus and did not do enough to slow its spread. It is unclear whether the lawsuit will have much, if any, impact.

Canada’s death toll from the coronavirus rose by less than 10% for the third day in a row, data showed on Wednesday, and some provinces prepared to start lifting shutdowns imposed to fight the outbreak.

China has again reported no new deaths from coronavirus, but registered 30 more cases - 23 brought from abroad. Of the domestic cases, all seven were reported in Heilongjiang province, near the Russian border where a field hospital has been set up to deal with a new flare-up related to people coming home from abroad.

China has reported a total of 4,632 deaths among 82,788 cases, the bulk of them in Wuhan where officials recently raised the death toll by 50 per cent after a review of records.

Officials say 33 more crew members on an Italian-operated cruise ship docked in southern Japan have tested positive, a day after the first case from the ship was reported.

The Costa Atlantica has been docked in Nagasaki since late January for repairs and maintenance by the Mitsubishi Heavy Industry. The potential for an outbreak surfaced on Tuesday when a crew member, identified only as a foreign national, tested positive for the virus.

The ship is carrying 623 crew members, including a Japanese translator, but no passengers. None of the crew had serious symptoms and they are being self-quarantined in single rooms, officials said.

India has ordered a pause in testing for antibodies to the coronavirus because of concern over the accuracy, health officials said on Wednesday, complicating the fight against the epidemic as its tally of cases nears 20,000.

India trails many countries in conducting the standard swab tests to determine the presence of the novel coronavirus because of limited testing equipment and protective gear for medical workers.

Early this month, health authorities approved blood tests for coronavirus antibodies as a faster way to bolster the screening effort and ordered more than a half billion testing kits from China.

India has detected 19,983 cases of the coronavirus, after an increase of nearly 1,000 cases in one day, according to government data. There have been 640 deaths, still a small number compared with tolls in many other countries, but officials say the infections could rise once a nearly six-week lockdown is lifted on May 3rd.

The total death toll from the coronavirus in Bangladesh reached 120 while the number of total infections rose to 3,772 with another 390 positive cases on Wednesday, an official said.

France warned on Wednesday it would not give its blessing to the European Union’s next long-term budget if wasn’t big enough to tackle the economic fallout of the coronavirus pandemic.

French president Emmanuel Macron has said the EU had “no choice” but to set up a fund that “could issue common debt with a common guarantee” and has also called for the future EU budget currently being discussed to be bigger than its current size.

“The president was clear on this: we will not give our agreement to a budget which doesn’t change enough to take into account the response to this crisis,” a French presidency official said.

On Wednesday, the French presidency official said France would rather have short stop-gap EU budgets than agreeing to a “bad deal” on the so-called multiannual financial framework (MFF), the EU’s long-term budget for 2021-2027.

“We will have, wherever the recovery fund is located, a discussion on the MFF, and for that you need unanimity,” the official said.

“For the moment, we’d rather have transition budgets than a bad deal on the MFF, regardless of this recovery fund. The approval of France and other countries will be indispensable on this point,” the official said.

France also backs a Spanish proposal for a “recovery fund” for the EU in principle, the official said, adding that the terms can be discussed but it should have long debt maturities.

Global recession could be prolonged

The prospect of a prolonged worldwide impact has hardened after a survey of thousands of business leaders warned of a drawn-out recession, with many companies likely to fold.

Around 60 per cent of chief executives surveyed are preparing for a U-shaped recovery - a long period between recession and an upturn. “We have not seen a crisis like this for over a hundred years, and some household names will not survive,” said Glenn Keys, executive chairman of Aspen Medical, a Singapore-based health services firm

David Beasley, chief of the UN’s food relief agency told the Guardian that urgent action must be taken to prevent widespread famines across more than 30 countries in the developing world, pushing at least 265 million people to the brink of starvation.

He said the Covid-19 pandemic has “taken us to uncharted territory”.

“We are looking at widespread famines of biblical proportions,” he said.
– Agencies