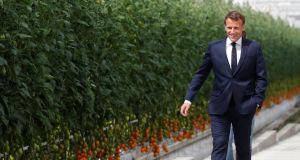 French president Emmanuel Macron walks in a greenhouse in western France on Wednesday, as part of a visit to support French farmers amid the Covid-19 outbreak. Photograph: Stephane Mahe/POOL/AFP via Getty Images

Plans for an EU recovery fund based on mutualised debt will be the most contentious issue at Thursday’s video conference summit of EU leaders, a close adviser to French president Emmanuel Macron predicted.

“Economic and financial solidarity is the most complicated subject. It provokes the most debate and divergence in Europe, ” the source at the Élysée said.

Some EU member states are opposed to pooling debt to help Italy and Spain, the countries hardest hit by the coronavirus pandemic.

Macron sees mutual assistance in the crisis as crucial to the survival of the European Union. “We are at a moment of truth, which is to decide whether the EU is a political project or just a market project,” he told the Financial Times last week. “I think it’s a political project . . . We need financial transfers and solidarity, if only so that Europe holds on.”

The EU has already approved EU loans to shore up businesses and for national unemployment insurance schemes, and created a €500 billion emergency response plan, the adviser to Macron noted.

“The fourth pillar, which remains to be defined, is the question of the recovery fund,” he said. There was “no magic number”, but France believed “we need at least an extra €1,000 billion”.

Thursday’s summit will not reach agreement on the amount, the adviser said. “We’ll have to make a definitive choice in coming weeks . . . A rushed accord would be second-rate.”

Before they can agree on details of the recovery fund, European leaders will need “a clear, sector by sector picture of the economic impact of this crisis”.

The recovery fund must include direct transfers of wealth, not just loans, the adviser insisted. “The president says it’s great for countries to help their own businesses. But obviously, different countries have different capacities. We must not think this crisis can be solved by national action plans.”

The adviser said if agreement was reached on Thursday “on the idea that we must have a budgetary instrument based on mutualised debt, we will have made great progress,” he said, adding that repayment must be over “the longest possible” period. France suggests a 10 to 20-year time frame.

The summit will be the fourth by videoconference since the crisis began. The negotiation of the long-term EU budget will require a physical meeting, which could take place before the summer, the adviser said.

France says it will not accept a budget that takes insufficient account of the pandemic. “A transition budget would be better than a bad agreement,” the adviser said. It was too soon to say whether the recovery fund and the long-term budget would be “interlocked”.

Macron “has taken many initiatives” in the crisis, the adviser noted. “The EU has reacted far more quickly and efficiently than in the 2008 crisis.”

But the EU had failed in two ways, he said. There was an initial lack of co-operation and co-ordination, particularly on closing borders, and on the whole “moral and political question” of financial solidarity.