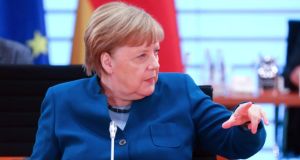 The Merkel government’s response today – compared to a decade ago – is still cautious but far more open to compromise. Photograph: Annibal Hanschke/pool via AP

Before EU leaders log on to their virtual European Council meeting on Thursday, all eyes will be on chancellor Angela Merkel when she addresses the Bundestag.

The German leader is no stranger to crises. Whether dealing with Ukraine, refugees or the euro, her 15 years in power have been defined by wrestling political chaos into a semblance of political calm.

But the Covid-19 pandemic will require every trick in her well-thumbed catalogue of political compromise. Unless she can help balance competing expectations and concepts on Thursday, the German leader knows that efforts to cushion the worst effects of the pandemic could see the virus claim European integration as its greatest casualty.

The battle over so-called coronabonds is, for many in Germany, a retread of a decade-old euro crisis debate over euro bonds. What has changed is that many minds in Berlin’s corridors of power are far more pragmatic than a decade ago.

The older guard, lead by Merkel, remembers the damage done by being seen to do too little, too late. Meanwhile a younger generation of pragmatic economists have steered Germany’s debate away from the more hard-nosed Dutch approach. Even leading German conservative politicians and economists, who previously ruled out joint debt instruments, are more open to the idea.

Yet Italy’s proposal to raise cash in the crisis – combine euro members’ combined creditworthiness for cheaper borrowing – still raises the hackles of German voters. Some 64 per cent are opposed, according to one magazine poll published on March 31st.

In a series of German media interviews Italian prime minister Giuseppe Conte has said any such instrument would be time-limited. But when most Germans hear “joint bonds” they envision an open-ended slippery slope where northern Europeans finance the spendthrift south.

Informed observers in Berlin say Merkel will use Thursday’s meeting to step up her intermediary role between southern Europe and the Netherlands.

Merkel flagged as much this week, signalling Germany was ready to show solidarity “and beyond” with Italy – though not, it seems, with bonds in their current form.

Instead a two-stage process is likely. First, Berlin will back efforts at an indirect crisis solution, including a boost to the European Commission’s capabilities to raise debt and bankroll countries in need. Second, if needed, German officials will move quickly to more ambitious measures – without saying what.

“Berlin officials say they cannot put all instruments on the table at once otherwise everyone picks the one that suits them best, at others’ expense,” said Prof Christian Kastrop, head of the Europe’s Future programme at the Bertelsmann Foundation.

Kastrop sees the Merkel government’s response today – compared to a decade ago, when he was an official at the federal finance ministry – as still cautious but far more open to compromise.

“Germans tend towards hesitation as it’s served them well,” he said. “What we’re lacking is someone who says Germany will do whatever it takes while explaining to people just how much we have from the euro – more than anyone else.”