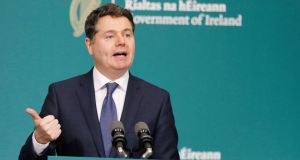 Minister for Finance Paschal Donohoe: this week he published the latest dire economic and deficit projections

As European leaders grapple with the fallout from the coronavirus pandemic, Ireland will adopt a pragmatic but cautious approach, say people with knowledge of the Government’s approach to the issues.

While Ireland is in favour of joint debt instruments that would assist member states meet the costs of the crisis, it is wary of fundamental changes in the EU which would cede fiscal and tax sovereignty to EU institutions.

Ireland will, says one person, “be pragmatic, focus on specific issues and try not to drag in huge questions about the future of Europe” when EU leaders meet by teleconference on Thursday to discuss the crisis.

Ireland is unusual among EU countries in pushing for joint debt instruments – where loans are raised or guaranteed centrally by the EU for use by individual member states – while not wishing to avail of them.

While northern EU countries, especially the Netherlands and Germany, have repeatedly blocked proposals for joint EU bonds, dubbed “coronabonds”, they have agreed to some relaxation of some of the strict conditions for accessing EU funds for countries in difficulty.

However, despite the additional fiscal pressures in Ireland – starkly advertised by Minister for Finance Paschal Donohoe this week when he published the latest economic and deficit projections – the Government here says it does not want to tap EU funds as it can raise whatever money it needs at rock-bottom rates on the bond markets.

Nonetheless, Ireland is unambiguously in the pro-coronabonds camp, even going as far as co-signing a letter – along with Belgium, Italy, France, Luxembourg, Spain, Portugal, Greece and Slovenia– in favour of the proposal before last month’s EU summit.

This signalled a break with previous allies in the “Hanseatic” group of northern states opposed to a larger budget, but was not, say sources, a decisive move towards the French position of seeking much greater budgetary and tax co-operation.

The Irish position is nuanced – in favour of greater EU firepower to deal with the current crisis, but wary of any fundamental changes in the balance between Brussels and national capitals on tax and spending issues.

Yet Ireland has always moved between blocs within the EU – aligning itself with the Dutch against tax harmonisation, with the French on the Common Agricultural Policy, with the British and Germans on trade – as the issue demanded.

Now Dublin wants to see the EU step up to act on the coronavirus calamity – including on how to pay for it – but is cautious about taking steps that have far-reaching consequences.

Privately, some senior officials say that Ireland is pitched somewhere between the strict “German” approach (though represented more in the current crisis by the Dutch) and the “more elastic” French-Italian-Spanish approach. “We’re pragmatists,” says one source.

Other sources stress Ireland is not hung up on the coronabonds idea and what matters is not the means but the end where EU countries in need to assistance receive it.

Ireland, says one, wants to see more firepower in the hands of EU institutions to deal with this crisis, but wants to steer away from the huge decisions about the future direction of the union touted by some because Dublin fears that they could set the EU on a path that Ireland would find uncomfortable – especially on tax and trade.

Coronavirus: US sets single-day record cases during new surge 08:16
Coronavirus: Frances passes 1m cases; Europe sees record number of new infections 22:05
US election: Trump travels to Florida as he steps up campaigning 21:05
Sudan to normalise ties with Israel in move dubbed by Palestinians as ‘a stab in the back’ 19:48
Pompeo steps up diplomatic efforts to end Nagorno-Karabakh fighting 19:36

1 Sinn Féin’s stand on Covid is facing increasing questions from political rivals
2 Love in a time of Covid: John and Mary marry over 40 years after first meeting
3 Coronavirus: Close contact numbers fall in sign restrictions may be working
4 Two hundred Irish retailers for all your online Christmas shopping
5 Cab investigates behind the massive gates of Chosen Few Motorcycle Club in Dublin
Real news has value SUBSCRIBE