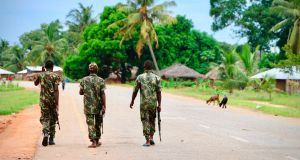 A file photograph from March 2018 shows soldiers from the Mozambican army patrol the streets after security in Mocimboa da Praia was increased following a two-day attack from suspected islamists in October 2017. Photograph: Getty Images

Islamist insurgents killed 52 villagers in Mozambique’s troubled northernmost province on April 7th after they refused to be recruited to their ranks, police said on Tuesday.

“The young men were about to be recruited but they resisted, which provoked the ire of the bandits that killed the 52 indiscriminately,” police spokesman Orlando Modumane said.

The killings took place in the village of Xitaxi in Muidumbe district in the province of Cabo Delgado, home to multi-billion-dollar gas projects led by oil majors such as Total.

Last Wednesday, national police commander Bernardino Rafael said no parts of the troubled province were under the control of insurgents. His comments came after an increase in the frequency of attacks in the province.

Security analysts say that in some cases insurgents have occupied parts of towns, villages or government buildings and hoisted a black-and-white flag.