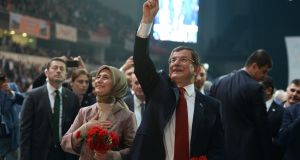 Ahmet Davutoglu and wife Sare Davutoglu in 2016: said when he decided to raise his voice, no mainstream Turkish station would broadcast him. Photograph: Gokhan Tan

President Recep Tayyip Erdogan’s ruling party is wrought with “widespread unhappiness”, his former prime minister has warned as he raised the prospect of leading a breakaway faction that could split Turkey’s dominant political movement.

Ahmet Davutoglu said that a deviation by the Justice and Development party (AKP) from its core values was fomenting deep discontent among the party’s grassroots and its upper echelons.

The AKP once prized “justice, freedom, freedom of thought, freedom of expression”, Davutoglu said in an interview with the Financial Times. “[But] over the past three years, what I have observed is that these basic values we respected throughout our life were ignored,” added the former party chairman, who resigned in 2016 after a power struggle with Erdogan.

He said Turkey’s “institutions are weakening” and the shift to a presidential system that placed unprecedented power in the hands of Erdogan was “damaging the basic structures” of Turkey.

Davutoglu, an important AKP figure since the party swept to power in 2002, is one of two heavyweights to have publicly voiced discontent after a painful election setback that resulted in the party losing control of Istanbul, Turkey’s largest city, and Ankara, the capital.

The former prime minister broke his silence in April with a 4,000-word critique of the direction the AKP was taking. Earlier this month, Ali Babacan, an influential former economy minister, said he was resigning from the party because Turkey needed a “new future vision”.

Such criticism by party veterans represents an unprecedented challenge to Erdogan, and comes at a time when he is dealing with deep economic woes and heightened tensions with the West. He has responded angrily to the prospect of a split, warning last week: “Those who take part in this kind of betrayal will pay a heavy price.”

Davutoglu, who remains an AKP member, said he still felt a “responsibility” to try to reform the party from within, but added: “I don’t have much hope.” No timeline had been fixed to form a new party.

Many in Turkey’s existing opposition have responded with deep scepticism to Davutoglu’s drive to cast himself as the solution to the country’s problems. As the chief architect of the AKP’s foreign policy, he is blamed by many for Turkey’s regional isolation following the Arab Spring.

Critics also say his rallying cry rings hollow given the severe curbs on freedom of expression and human rights in Turkey by the time he left office in 2016.

Davutoglu is defensive on his record, insisting that he repeatedly raised his concerns over Turkey’s drift into authoritarianism. “I defended many journalists,” he said. “I said ideas and intellectual freedom should be respected.”

Sceptical liberals are also unlikely to be impressed by his refusal to condemn the jailing of Selahattin Demirtas, a Kurdish opposition leader who has spent almost three years behind bars on terrorism charges. “Demirtas was put in jail six months after my resignation so I am not responsible for this,” he said, adding: “It is a legal process . . . I cannot do anything.”

Despite the erosion in his support, Erdogan remains the country’s most popular politician. A recent survey by the pollster PIAR found that 80 per cent of AKP voters would never back a party founded by Davutoglu. The poll suggested that a party led by Babacan, who has resisted joining forces with Davutoglu, would be viewed more favourably.

The former prime minister said politicians needed to change the dynamics rather than follow them, adding that his aim was to create a new political climate in Turkey. “What we need is a new psychology based on openness, transparency, freedom and speaking without any fear,” he said.

Davutoglu said that when he decided to raise his voice, no mainstream Turkish broadcaster would accept his requests to appear on their channels.

Three opposition journalists who interviewed him in a YouTube programme this month later found that their shows with the Turkish-language arm of the Russian state-owned network Sputnik had been terminated – an apparent sign of the growing closeness between Ankara and Moscow after Turkey’s purchase of a Russian S-400 air defence system.

Davutoglu said he had deliberately sought to open up a discussion on issues such as corruption and nepotism “because as a former prime minister, if I am scared, citizens cannot talk”.

He added: “If you are scared of talking, of thinking, there cannot be a solution.” – Copyright The Financial Times Limited 2019