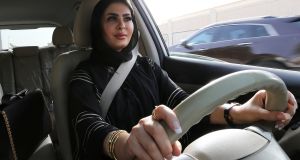 Huda al-Badri (30) poses behind the steering wheel of a car after Saudi Arabia eased its restrictions on women drivers in 2018. Photograph: Ahmed Yosri/EPA

Saudi Arabia’s partial lifting of its guardianship law, which it announced on Friday, is a significant step toward the abolition of the practice of male control over female relatives. Women over 21 will be permitted to secure passports, travel abroad, register births and marriages, and work without the permission of fathers, husbands, brothers and sons.

Saudi Arabia’s first female ambassador to the US, Reema bint Bandar al-Saud, told al-Jazeera: “These new regulations are history in the making. They call for the equal engagement of women and men in our society. These developments have been a long time in coming.”

The entire guardianship system has not yet been revoked. Women still have to seek permission of an appropriate male relative to marry, divorce, access medical procedures, and obtain release from prison.

The prime mover of the reform, Crown Prince Mohammed Bin Salman, the king’s powerful son, last year lifted the ban on women driving, opening the door to further relaxation of measures which treated women as minors from birth to death and tied them to families that restricted their every movement.

In an interview with the Atlantic last year, Bin Salman said he had to consider the interests of both Saudis eager for change and conservatives committed to the kingdom’s religious, social and cultural traditions. “Saudis don’t want to lose their identity, but we want to be part of the global culture. We want to merge our culture with global identity,” he said.

Although Bin Salman has been widely condemned for the murder of dissident journalist Jamal Khashoggi at the Saudi consulate in Istanbul and the brutal and destructive war in Yemen, he remains popular with young Saudis who are eager to join the 21st century. To win their approval, he has permitted women to attend sporting events, opened cinemas, and endorsed classical and popular music concerts.

The prince has come under strong foreign pressure to relax male guardianship by high profile cases of young women fleeing strict and abusive relatives and applying for asylum in western countries where they can live independent lives. Although several of these women have been minors, the change in the law could give others hope they could eventually escape relatives and the kingdom’s ultra-conservative social practices and culture, which contrast dramatically with life in the West.

It is not clear when the new measures, which were printed in the Saudi official gazette, Umm al-Qura, will go into effect or how long it will take Saudis to accept the changes.

The reforms will exert fresh pressure on Bin Salman to release prominent female human rights activists, including Loujain al-Hathloul, who campaigned for an end to the driving ban on women and male guardianship.

She and 11 others were jailed in May last year and have been committed to trial charged with working for foreign interests. Seven have been released on bail but not Hathloul. More than 200 men and women have arrested in Bin Salman’s crackdown on dissent since he detained hundreds of businessmen and princes in his 2017 campaign against corruption.