Saudi women to be able to travel without guardian’s permission 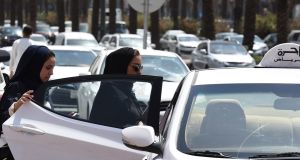 Saudi women get into a taxi in the Saudi capital Riyadh. Photograph: Fayez Nureldine/AFP/Getty Images

Women in Saudi Arabia will no longer need the permission of a male guardian to travel, according to new laws published on Friday, in a key step towards dismantling controls that have made women second-class citizens in their own country.

Other changes issued in the decrees allow women to apply for passports, register a marriage, divorce or child’s birth and be issued official family documents. It also stipulates that a father or mother can be legal guardians of children.

Being able to obtain family documents could ease hurdles women faced in obtaining a national identity card and enrolling their children in school.

Still in place, however, are rules that require male consent for a woman to leave prison, exit a domestic abuse shelter or marry. Women, unlike men, still cannot pass on citizenship to their children and cannot provide consent for their children to marry.

Under the kingdom’s guardianship system, women essentially relied on the “good will” and whims of male relatives to determine the course of their lives.

Friday’s move comes at a time of increased international scrutiny of women’s status in Saudi Arabia. In recent months several young women have fled the country and made public pleas for help in seeking asylum from their family and the government.

Last year authorities arrested many of the country’s most prominent female campaigners in a sweeping crackdown on activists.

The country’s crown prince and de facto ruler, Mohammed bin Salman, has sought to present himself as a modernist reformer since being appointed heir to the throne in 2017. Critics say the jailing of female activists under his watch and the treatment of dissidents, including Jamal Khashoggi, the journalist who was murdered at the Saudi consulate in Istanbul, suggests the regime only wants change on its terms.

Prince Mohammed has brought in sweeping social and economic changes, aimed partly at weaning the country off its dependence on oil revenue. He has also dismantled some of the strictest controls over women. Last year a driving ban was lifted, and rules were altered freeing women from needing permission from a male guardian to study at university, undergo surgery or get a job.

The crown prince has also curbed the powers of the religious police, who once pursued women they considered immodestly dressed to check they had a guardian’s permission for their activities. They also broke up mixed-sex gatherings.

Those changes were welcomed by activists who say Saudi Arabia’s guardianship system has kept its women in a legal limbo as “perpetual minors” and should be dismantled entirely.

Prince Mohammed has also been criticised for Saudi Arabia’s role in Yemen’s brutal civil war, and his relentless pursuit of opponents at home and abroad, most prominently of Khashoggi. A forensic and damning UN report said that the crown prince should be investigated over the murder because there was “credible evidence” that he and other senior officials were liable for the killing. He has denied any involvement.

The new rules, approved by King Salman and his cabinet, allow any person 21 and older to travel abroad without prior consent and any citizen to apply for a Saudi passport on their own.

The decrees, issued on Wednesday, were made public before dawn on Friday in the kingdom’s official weekly Um al-Qura gazette. It wasn’t immediately clear if the new rules go into effect immediately. – Guardian/AP