Leading Polish archbishop Marek Jedraszewski compares Poland's LGBTI community to the “red plague” of the communist era while speaking at a Mass in Krakow to mark the 75th anniversary of the Warsaw Uprising against Nazi occupation in 1944. Video: Reuters 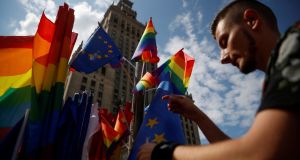 A protester against violence suffered by Poland’s LGBTI community during a Pride march in Bialystok last week. Photograph: Kacper Pempel/Reuters

A leading Polish archbishop has compared the country’s LGBTI community to the “red plague” of the communist era.

Archbishop Marek Jedraszewski of Krakow was speaking during a Mass in St Mary’s Basilica on Thursday to mark the 75th anniversary of the Warsaw Uprising against Nazi occupation in 1944.

His remarks are the latest verbal attack by leading cleric as the ruling Law and Justice Party (PiS) party stokes up a campaign against the lesbian, gay, bisexual, transgender and intersexual community in Poland.

“A red plague is not gripping our land anymore, which does not mean that there is not a new one that wants to control our souls, hearts and minds,” he said. “Not red, but rainbow.”

In his homily, Archbishop Jedraszewski recalled the heroism of Poland’s Home Army against Nazi occupation, and the country’s struggles under fascism and then decades of “Bolshevism” rule as a Soviet satellite state.

He said that “promoting LGBTI ideology denies human dignity” because the “rainbow disease” was “neo-Marxist” in its absolutist ambition.

A day earlier, in the Polish pilgrimage site in Czestochowa, he urged the faithful to “defend the truth about the creation of a woman and a man to live together and to have children”.

After his homily, Massgoers marked his 70th birthday by singing him a song wishing him “one hundred years” more.

Poland’s influential Catholic Church, under fire because of growing clerical sex abuse revelations, has embraced a political campaign launched by PiS to secure re-election in the autumn.

Five years after an anti-immigration campaign helped PiS secure an absolute majority, party leader Jaroslaw Kaczynski has described the LGBTI movement as a threat to Polish values, and the state itself.

Anti-LGBTI rhetoric is now widespread in Polish debate, stoking up what gay rights campaigners perceive as a “pogrom mood” they fear may spill over into violence. Regional gay pride marches this year were attacked by stone-throwing football hooligans, nationalists and locals.

A week ago, a Warsaw court issued an injunction against a Polish newspaper, forbidding it from distributing a sticker – a crossed-out rainbow symbol – reading: “LGBT-free zone”. The newspaper ignored the injunction and could now face a fine.

Polish gay rights campaigner Bartosz Staszewski, whose complaint led to the injunction, said it was “disgusting when a top cleric says that we are a rainbow disease”. He drew parallels between the Polish church “enemy philosophy” in the second World War.

“Then it was Jews, today gays,” said Mr Staszewski. “It’s not a church of God it’s a church of hate. And it’s not a crime, what he said. All we can do is look on as the fruit of hate grows.”