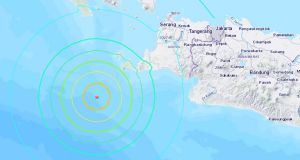 The location of a magnitude 6.8 earthquake which struck at a depth of 42.8km at 105km west-southwest of Tugu Hilir, Indonesia.

Indonesia has lifted a tsunami alert issued after a strong earthquake struck off the coast of Java island. The ripple effect swayed buildings as far away as the capital Jakarta and rattled nerves in coastal areas, but did not cause widespread damage.

The earthquake occurred off the Indonesian islands of Sumatra and Java on Friday, triggering a two-hour tsunami warning that sent coastal dwellers fleeing to higher ground and panicked people in the capital Jakarta.

The US Geological Survey put the epicentre in the Indian Ocean about 227km (141 miles) from Teluk Betung city on Sumatra with an initial magnitude of 7 that was later lowered to 6.8.

There appeared to be no substantial damage or casualties, but strong tremors were felt in Jakarta, prompting people to flee office buildings.

“It was so scary,” said Gustiani Pratiwi, carrying two children out of an apartment block in Jakarta after feeling the quake.

Indonesia is situated on the so-called Pacific Ring of Fire, which is frequently hit by earthquakes and sometimes accompanying tsunamis.

The most devastating in recent Indonesian history was on December 26th, 2004, when a magnitude 9.5 quake triggered a massive tsunami that killed some 226,000 people along the shorelines of the Indian Ocean, including more than 126,000 in Indonesia.

Indonesia’s geophysics agency had issued a warning of potential tsunami waves up to 3m (10ft). TV footage showed passengers at Jakarta’s international airport rushing out of a terminal building, but authorities later said the airport was operating normally.

The quake could also be felt in other cities such as Yogyakarta on Java island.

Last year, a tsunami hit the city of Palu in Sulawesi island, killing thousands, while a crater collapse at the Anak Krakatau volcano triggered a tsunami that killed at least 430 people in an area near the latest quake.   – (PA/Reuters)