Mother who killed daughters after they ‘got in the way’ jailed 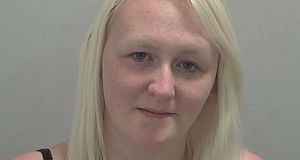 Warwickshire Police undated handout photo of Louise Porton who has been jailed at Birmingham Crown Court for life with a minimum term of 32 years for the murder of her two young daughters. Photograph: PA

A mother who murdered her two young daughters after they “got in the way” of her sex life has been jailed for life with a minimum term of 32 years.

A jury at Birmingham Crown Court convicted her of both murders following a five-week trial.

Jailing Porton on Friday, Mrs Justice Yip described her actions as “evil” and “calculated”, and told her: “These were blameless young children who were plainly vulnerable and ought to have been able to rely on their mother to protect and nurture them.

“Instead you took their young lives away.”

Porton, who described herself to male suitors as a “model”, accepted 41 friend requests on a dating app just a day after Lexi’s death.

She was described as being “calm and emotionless” following Scarlett’s death and delayed calling an ambulance for the youngster, even filling up with petrol as the toddler lay dead or dying in her car.

When Lexi was ill in hospital, just over a week before she died, Porton took topless photos in the toilets and was arranging to perform sex acts for money with a man she had met through a website.

Warwickshire Police said it was also “clear from the evidence” that Porton had tried to kill her three-year-old twice before, in early January 2018, before eventually succeeding.

At the time, she used her Google account to search for “Why did my 3 year(-old) stop breathing”, and “How long after drowning can someone be resuscitated?”

The 23-year-old, of Skiddaw, Rugby, Warwickshire, suffocated Lexi in the early hours of January 15th last year and was then heard “laughing” at a funeral parlour two days before killing Scarlett just over two weeks later, on February 1st.

At the start of the trial, prosecutor Oliver Saxby QC said being the young mother of two young children would have placed a burden on Porton. “No doubt, she would have needed time to herself,” he said.

“But in the context of what was later to happen — in the context of two unexplained deaths consistent with deliberate airway obstruction — it is hard not to draw the conclusion that, for the defendant, at times, her two children got in the way of her doing what she wanted, when she wanted and with whom she wanted.”

The girls’ father, Chris Draper, who never had the chance to meet Scarlett, said he felt “broken”, with “nothing to live for”.

In a victim impact statement read to court by the prosecution, he said: “Why did Louise do something so evil to our beautiful daughters?

“You are their mother, the person supposed to care for them, protect and love them.

“They were just an inconvenience to you; how could you do this?”

Porton sat in the dock throughout the hearing, with her head resting on her hands, looking down at her feet.

Mr Draper added: “I sit and think, day and night, and I can’t understand why my two little girls were taken away because Louise wanted to sleep around.

“Maybe if social services had listened to me, my girls would still be alive today.”

Mr Draper, who was in court for sentencing, said: “I hate Louise.

“No punishment will ever be enough, as I will never get my daughters back.”