Endgame for Spain’s Rajoy as parliament turns against him 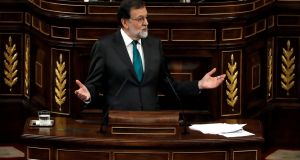 Spain’s prime minister Mariano Rajoy during a motion of no confidence debate at parliament in Madrid on Thursday. Photograph: Juan Carlos Hidalgo/Reuters

The political career of Spain’s prime minister Mariano Rajoy appeared to be over on Thursday as support for a no-confidence motion against him gathered and there were increasing calls for him to resign ahead of today’s final vote.

Allies of Mr Rajoy, a conservative who took office in 2011, insisted on Thursday night that he would not resign, despite the fact that a parliamentary majority has formed against his Popular Party (PP).

The Spanish Socialist Workers’ Party (PSOE) brought the no-confidence motion against Mr Rajoy due to the implication of the PP government in a torrent of corruption scandals.

The Socialists need an absolute majority in the 350-seat congress in order to unseat Mr Rajoy in the confidence motion vote and make their own leader, Pedro Sánchez, prime minister. The leftist Podemos had already pledged its support for the motion and, during Thursday’s parliamentary debate, several regional nationalist parties confirmed their backing for it.

However, those votes still left the motion’s success just short of the 176 needed, leaving the key to the majority with the Basque Nationalist Party (PNV). Members of the PNV leadership met throughout the day to evaluate Mr Sánchez’s proposals for his own government. During the afternoon parliamentary session, which Mr Rajoy did not attend, PNV spokesman Aitor Esteban said that the party would vote to remove the prime minister, “responding to what the majority of Basque society demands”.

In a tense and often fierce debate in parliament, Mr Sánchez and PSOE spokesman José Luis Ábalos accused the PP and Mr Rajoy of lacking credibility to govern. They placed particular emphasis on a high court judgment last week which explicitly linked the PP to a contracts-for-bribes network and said it had run a slush fund.

“Resign, Mr Rajoy, and all this will come to an end,” Mr Sánchez said. “Your time is up.”

He added: “Never before has a no-confidence motion been so necessary for the country’s democratic hygiene.”

Rumours had circulated that Mr Rajoy was considering resigning ahead of the debate, but an aggressive parliamentary performance soon scotched such reports. The prime minister responded to the Socialists by reminding them of a corruption scandal of their own in the Andalucía region.

He also questioned Mr Sánchez’s suitability to form a government, given that the Socialists only have 84 seats in congress.

“Everyone knows that Pedro Sánchez is never going to win an election and that’s why he’s presented this motion – because of his own needs,” Mr Rajoy added.

In a bid to counter Mr Rajoy’s warnings that a Sánchez-led government would unleash economic chaos, the Socialist leader said he would maintain the 2018 budget approved by congress last week and which still has to go through the senate.

As speculation swirled over whether Mr Rajoy would resign overnight, the prospect loomed of him having to face a confidence motion this morning which he is all but certain to lose.

Albert Rivera, leader of the Ciudadanos party, which has withdrawn its support for the PP in recent days, appealed to Mr Rajoy to resign and negotiate the calling of a general election.