Violence flares up at Gaza-Israel border

After mortars and air strikes, Israeli minister Yisrael Katz warns of being on brink of war 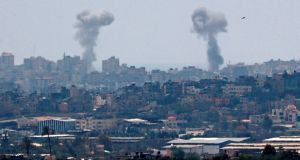 Militants fired more than 50 mortar shells and rockets at southern Israel and Israel pounded targets across Gaza on Tuesday in the most serious violence on the Gaza-Israel border since the 2014 Gaza war.

Both Israel and Hamas indicated on Tuesday night that they were not seeking further escalation and Egyptian intelligence officials were in contact with both sides in an effort to diffuse the tension.

Israeli intelligence minister Yisrael Katz warned the country was closer to war than it had been since 2014. “We don’t want it, and the other side doesn’t either, but we have our red lines,” he said.

After Israeli planes carried out waves of retaliatory strikes, militants fired rockets at southern Israel, including towards the large coastal city of Ashkelon, although most of the projectiles were intercepted by Israel’s Iron Dome air defence batteries.

Israelis in the south rushed to bomb shelters while Hamas and Islamic Jihad fighters evacuated posts throughout Gaza.

An Israeli military spokesman said the army had attacked at least 35 militant targets since Tuesday morning, including a tunnel at the southern tip of the Gaza Strip that crossed into Egypt and then penetrated 900m into Israeli territory. Other targets hit, according to the Israeli army, included weapons storage facilities, militant headquarters, naval sites and training compounds.

Israel blamed the Iranian-backed Islamic Jihad for the mortar fire, saying the action was in response to the death of three operatives in Israeli tank shelling on Sunday.

“This is a blessed retaliation. Our people’s blood is not cheap,” Islamic Jihad spokesman Daoud Shihab said.

Prime minister Binyamin Netanyahu said Israel took the attacks on the south very seriously. “The army will mount a forceful response. We hold Hamas responsible. Israel will exact a heavy price from anyone who tries to harm it,” he said.

There was no immediate word on Palestinian casualties. Five Israelis were injured and one of the mortars landed near a kindergarten an hour before the children were due to arrive. Residents in the south were ordered to remain close to bomb shelters.

Tensions on the Israel-Gaza border have been high since Hamas launched the March of Return protests on March 30th in an effort to breach the border and break the blockade on the coastal enclave, maintained by Israel and Egypt. More than 100 Palestinians have been killed by Israeli fire during the protests.

Tánaiste Simon Coveney strongly condemned the firing of rockets from Gaza at Israel.

“I continue to advocate strongly for people of Gaza who live in impossible conditions – but this Hamas-led violence undermines the Palestinian cause and is counterproductive to political progress,” he tweeted.