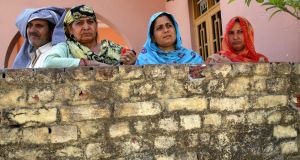 Residents of Nanga village in India in a building damaged by alleged shelling from the Pakistani side of the Kashmir border on May 23th. Photograph: EPA/Jaipal Singh

Nuclear rivals India and Pakistan have agreed to reinforce their 2003 ceasefire agreement to end their daily exchange of artillery, missile and small arms fire across their disputed border in the northern Kashmir region.

The directors general of military operations from the respective armies consented on Tuesday evening to maintain the 15-year ceasefire along the 747km line of control, or LoC, that divides Kashmir between the neighbours.

Both armies declared in near identical official statements that all future ceasefire infringements would be resolved through existing mechanisms such as hotlines and “flag meetings” between local commanders on the border.

Senior Indian leaders, including Kashmir’s chief minister Mahbooba Mufti, welcomed the “reiteration of ceasefire” as it provided relief to border residents. “Peace on our borders is the first essential step to a larger understanding [between India and Pakistan] and I truly hope it sustains,” Ms Mufti tweeted.

Indian army soldiers concurred. “Peace initiatives at the LoC must receive enthusiastic welcome,” said former lieutenant general Syed Hasnain, formerly stationed in Kashmir. However, he warned that such initiatives needed to be backed by “matching add-ons” to further bilateral peace.

Earlier this month India accused Pakistan of committing 881 ceasefire violations across Kashmir’s de facto border between January and the third week of May, the highest such number recorded after the two countries approved the 2003 truce.

It also claimed that 36 civilians living in border villages had died in these firings, and thousands of others had been forced to flee their homes to escape the deadly bombardment. In turn, Pakistan accused India of infringing the ceasefire on countless occasions and of killing at least 28 of its civilians.

The LoC, which is one of the world’s most militarised frontiers, divides Kashmir between India and Pakistan, both of whom claim the Himalayan principality in its entirety in one of the world’s longest running territorial disputes.

Nearly 300,000 heavily armed Indian and Pakistani soldiers confront each other, often a few feet apart, along this border that snakes across inhospitable snow-capped mountains, forests and rivers.

Artillery battles were a regular feature across the LoC until 2003, when the two sides agreed to a ceasefire as the ensuing devastation was proving disastrous to both countries and the threat of conflict escalation loomed.

However, the ceasefire began unravelling from 2013 onwards after bilateral ties between the neighbours deteriorated and cross-border firings gradually proliferated.

India claims the Pakistan army violates the ceasefire along the LoC to facilitate the infiltration of armed militants into Kashmir to boost the insurgency raging in the state since 1989 for an independent Muslim homeland, which has claimed more than 70,000 lives.

Pakistan denies this, saying it has provided Kashmir’s separatists diplomatic and political support to accomplish “self-determination” in the face of human rights abuses by India’s security forces.

Each side blames the other for the aggression and the tit-for-tat firings but it is virtually impossible to independently verify these conflicting claims as the respective armies control access to the LoC region.

India and Pakistan have fought two of their three wars since independence in 1947 over Kashmir.

And in 1999, soon after both became nuclear weapon states, their armies clashed in Kashmir’s Himalayan Kargil region for 11 weeks, resulting in 1,200 soldiers dying. The conflict threatened to escalate into a nuclear exchange, but was defused by US intervention.

1 Bobby Storey: The IRA's planner and enforcer who stayed in the shadows
2 Gardaí seek help in finding missing Roscommon toddler
3 Rare whale dies after getting into distress in Wicklow Harbour
4 Coronavirus claims one more life while 11 new cases reported in Republic
5 Covid-19: Travel restrictions to stay and 'green list' put on hold amid fears of second wave
Real news has value SUBSCRIBE