US warships sail near Paracel Islands as tensions grow 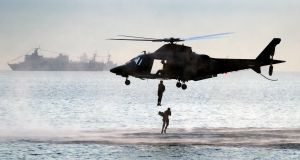 The Philippine navy simulating a rescue during a navy anniversary celebration in Manila. President Rodrigo Duterte has said he would go to war over his country’s rights to resources in the South China Sea area. Photograph: EPA

China has urged the US to stop “causing trouble” in disputed territories in the South China Sea after US warships sailed near the Paracel Islands claimed by Beijing, while Philippines president Rodrigo Duterte said he would go to war over his country’s rights to resources in the area.

In what looks like a tougher line on China’s territorial ambitions in the region, the US sailed the guided-missile destroyer USS Higgins and the cruiser USS Antietam within 20km of four of the Paracel Islands.

Tensions are rising in the region. Earlier this month Chinese strategic bombers landed on islands and reefs in disputed areas of the South China Sea, and also placed missile systems on disputed islands.

The US described its manoeuvre as a “freedom of navigation operation” aimed at enforcing the right of free passage in international waters, which is the usual formulation for these sailings.

The operation took place on Sunday, and the Chinese foreign ministry issued a statement calling on the US to cease operations that “encroach upon China’s sovereignty and threaten China’s security and the good order of the surrounding waters”.

The People’s Liberation Army then sent ships and aircraft to identify and warn off the US vessels, China’s defence ministry reported.

China has disputes with the Philippines, Brunei, Malaysia, Vietnam and self-ruled Taiwan over territory in the maritime area. Beijing has rejected a ruling by an international tribunal in The Hague dismissing its claims.

About €4.75 trillion in trade passes through the region every year.

Speaking to the China Daily newspaper, Fang Bing, a military strategy professor from the PLA National Defence University, said the US had no reasonable cause to interfere with China’s reasonable development and defence measures on its own soil.

“The US’s aggressive moves would have no other consequences than pushing us to keep taking defence measures on our islands and reefs,” Mr Fang noted.

Defence ministry spokesman Wu Qian said the US had repeatedly shown who was the “real troublemaker in the region and the biggest contributor to ‘militarisation’ in the South China Sea”.

Meanwhile in the Philippines, which has a dispute with China over the Scarborough Shoal range of islands, the President Duterte said any attempt to take his country’s resources would lead to war.

Foreign affairs secretary Alan Peter Cayetano said the Philippines had informed China of some “red lines” over the disputed waterway. “What is our red line? Our red line is that they cannot build on Scarborough,” Mr Cayetano said during a flag-raising ceremony.

He also said natural resources were another “red line”, saying Mr Duterte was prepared to go to war over this issue.“That’s what the president said.”