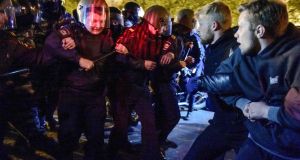 Riot police confront activists protesting against a plan to build an Orthodox cathedral in a park in the Russian Urals city of Yekaterinburg. Photograph: Alexei Vladykin/AFP/Getty

Police in the Russian city of Yekaterinburg were bracing for fresh protests on Thursday as activists prepared to rally for a fourth night against plans to build a new cathedral in a central park.

President Vladimir Putin called for a referendum to decide the future of the controversial Saint Yekaterina Cathedral project that has drawn tens of hundreds of people in Russia’s fourth-biggest city on to the streets this week.

Protesters say the project will deprive them of one of the last green recreation spaces in the city centre.

The Russian Orthodox Church says Saint Yekaterina will play an important role in restoring historic memory of a cathedral of the same name that was demolished in Yekaterinburg in the 1930s as the Soviet dictator Josef Stalin crushed organised religion. Wealthy local businessmen backing the project have pledged to open the cathedral in 2023 to mark the 300th anniversary of Yekaterinburg’s foundation.

For the most part the protests that began on Monday have been peaceful, with people bringing picnics to the square and playing music, although there have been scuffles with pro-religious activists mingling in the crowds.

Riot police cracked down late on Wednesday night, dispersing the crowd and taking more than 60 activists into custody.

However, Mr Putin sounded a more conciliatory note, suggesting that the local government in Yekaterinburg hold a referendum to decide the future of the cathedral project.

“Definitely public opinion should be taken into account – if we are talking about local residents and not activists from Moscow who have come to make a noise and advertise themselves,” Mr Putin told a media forum in the Russian resort of Sochi on Thursday. “The cathedral should not divide people, but unite and the city authorities should see to that.”

Mr Putin’s intervention signals alarm about the scale of the protests in Yekaterinburg that come amid a surge in local civic activism in Russia as ordinary people struggle to get their voices heard. It also draws attention to the cathedral dispute that has been barely mentioned on Kremlin-backed television.

Meanwhile e1.ru, an online news broadcaster in Yekaterinburg, says it has been battling a flood of spam all week that threatened to paralyse its reporting efforts.

The Russian Orthodox Church has become increasingly powerful as the Kremlin seeks to fill the ideological gap left by the fall of state communism and promote national unity.

Like many big Russian cities, Yekaterinburg has seen a boom in construction of new churches including the magnificent Church on the Blood built on the site of a mansion where Bolshevik revolutionaries murdered the last tsar and his family in 1918.

Andrey Kuraev, a Russian Christian Orthodox deacon often critical of the authorities, believes it would be better to build the new cathedral in an underprivileged quarter of the city to boost urban regeneration. “Church leaders should think more about what they can give rather than what they can take,” he wrote on Russia’s LiveJournal social network.

So far the demonstrators have no leader or overtly political agenda. However, educated Russian activists increasingly see the Orthodox church as part and parcel of the country’s corrupt and repressive political regime, said Konstantin Eggart, a prominent Russian journalist and political commentator.

“The image of the Russian Orthodox Church merges indistinguishably with Putin, with officials in Brioni [designer clothes], crooks in Porsches and corrupt police with Omega watches on their wrists,” he wrote on the snob.ru news site.