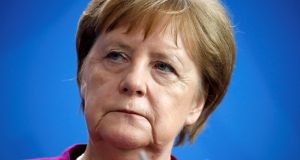 German chancellor Angela Merkel said she was not interested in whether she would enter the history books as an “austerity” or “refugee” chancellor. Photograph: Odd Andersen/AFP/Getty Images

German chancellor Angela Merkel has denied that her European Union policies – in the euro or refugee crises, or in the current reform debate have divided or undermined the continent ahead of European parliamentary elections.

Europe’s longest-serving leader, in office since 2005 and now in her fourth and final term, said she was not interested in whether she would enter the history books as an “austerity” or “refugee” chancellor.

“What counts is that the currency union and the euro were maintained,” she said. Reforms in countries such as Ireland and Greece “have proven to be right, even if I don’t dispute that the burden for the population was considerable”, she said.

The refugee issue would remain a reality in Europe for decades to come, she said, as would demand both greater EU burden-sharing as well as efforts to tackle the roots of migration by boosting prosperity in Africa.

“Decisions can only be fully judged in their reach when one considers what effect the opposite politics would have had,” she told the Süddeutsche Zeitung daily. “If we had not reacted, or acted completely differently in the euro or refugee policies, I think it would have had much worse consequences. These are not decisions created at a drawing board but are answers to real life.”

Dr Merkel was similarly defensive against claims that, on her watch, her administration had become more an EU retarder than reformer.

Plans by French president Emmanuel Macron to overhaul the EU, such as with a euro budget and finance minister, were first stalled, then watered down by Berlin – or scrapped entirely. French officials complain that German talent for rejecting Parisian proposals is not matched by ideas of their own.

Dr Merkel noted she operated under different political realities to Mr Macron: a coalition government and decentralised, federal system, while France was a nuclear power and a permanent UN Security Council member.

Mr Macron was “not so long” in office and “still brings a little the outside perspective”, she said.

Both leaders were “on the same wavelength” on big questions facing the continent, she insisted, while dismissing Mr Macron’s warning that the EU, ahead of the parliamentary elections, had “never faced such danger”.

“I find it difficult to compare Europe’s current situation with dangers of previous decades because I wasn’t around then and am actively involved today,” she said.

She welcomed the common EU foreign policy – including on the Russia-Ukraine crisis and the US-Iran stand-off – but said greater efforts and ambition was necessary.

Striking a very different tone to Dr Merkel this week was President Frank Walter Steinmeier, her former foreign minister, who noted a growing divergence between how Berlin and its neighbours perceived German EU policies. “We Germans consider ourselves the best Europeans,” he said, describing Germany as a country whose generosity to neighbours was based on having “learned the lessons of European history most thoroughly”.

“But through the eyes of others we often look very different,” he said, noting partners’ frustration with German contribution to EU foreign, defence and economic/euro policy. When Germany viewed its engagement as helpful and showing solidarity, he pointed out, others accused Berlin of “pursuing only national interests”.

“The risk is real that Germany is isolating itself in Europe, and that with the best of intentions,” he said. “This has become impossible to ignore in recent years.”

At a podium discussion in Berlin, he suggested the future of the EU lay in its ability to take pragmatic approaches to growing challenges. “The art of survival lies in the art of improvisation,” said Mr Steinmeier, leaving unanswered whether he believes his fellow Germans have the necessary pragmatism in their genes.