Former Eta leader arrested in France after 17 years on run 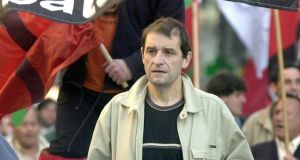 The former leader of terrorist group Eta known as Josu Ternera has been arrested in France after being on the run since 2002.

French and Spanish security forces dEtained Ternera (68), whose real name is José Antonio Urrutikoetxea, as he left a residence in Sallanches, in the Alps, early on Thursday morning.

“French-Spanish cooperation has once again shown its efficiency,” tweeted Spain’s Socialist prime minister, Pedro Sánchez. “My gratitude to the [Spanish] civil guard and the French intelligence service, the DGSI, for the arrest of Eta leader Josu Ternera in France.”

Ternera was a key figure in Eta for decades, being linked to some of its most notorious attacks as well as playing a role in ending its campaign of violence. He joined in 1968, the year Eta carried out its first killing, when dictator Francisco Franco was still in power. He rose through the ranks and, in 1987, succeeded Domingo Iturbe Abasolo as the organisation’s figurehead following the former’s death.

Ternera’s arrival as leader coincided with one of the bloodiest periods of Eta’s campaign for an independent Basque state. In 1987 alone the group killed 53 people, including 11 who died – six of them children – in the bombing of a civil guard barracks in the city of Zaragoza.

In 1989, Ternera was jailed in France in connection with other terrorism-related offences and extradited to Spain in 1996, where he remained in prison until 2000. However, before his release he won a seat in the Basque parliament for the pro-independence Euskal Herritarrok.

In 2002, after being cited to declare as part of a judicial investigation into the 1987 bombing in Zaragoza, Ternera went underground and remained in hiding until his arrest on Thursday. Nonetheless, he was involved in peace talks that took place in 2006 with representatives of the Socialist Spanish government and which ultimately failed.

Having claimed over 800 victims, Eta last killed in 2010 following heavy police pressure and the group disbanded in May 2018. Ternera read the communiqué which formalised its termination.

France was a common haven for Eta members who were on the run from the justice system and in 2015, Ternera’s son, Egoitz Urrutikoetxea, was arrested in Paris and jailed on terrorism charges.

According to Spanish media, Ternera had been living for some time alone in a house in Sallanches, near the winter sports hub of Saint-Gervais-les-Bains on the Italian border, and was nearly arrested two years ago when spotted in the area. His arrest took place as he was on his way to a local hospital, according to reports.

Ternera faces an eight-year jail sentence issued by a French court for association with a terrorist group, although the Spanish government said he could be extradited to face trial on other charges.